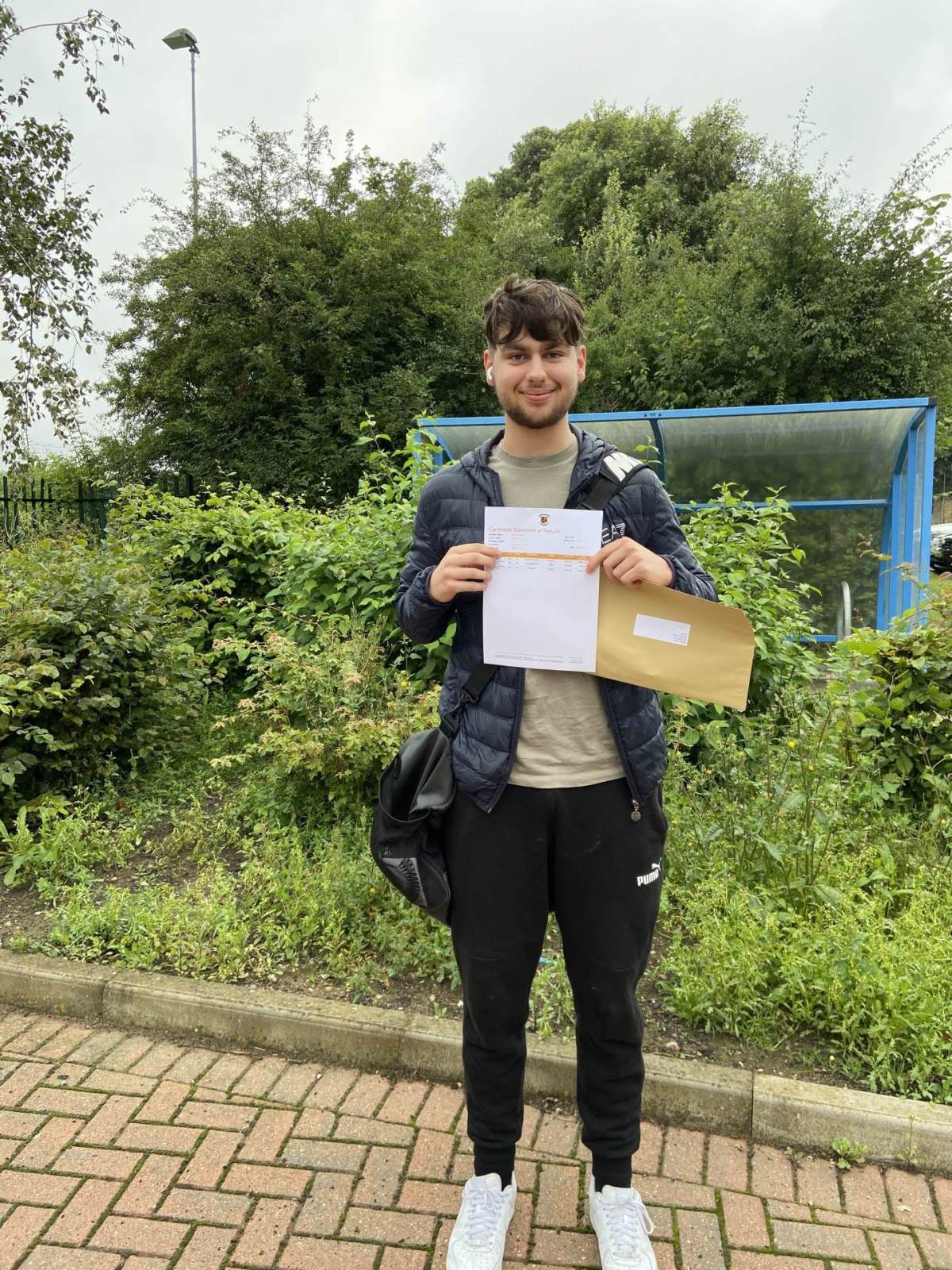 Our superb and ambitious Head Boy Marko is delighted to have achieved 2 A*s and 1 A in Maths, Physics and Chemistry. He will begin his next chapter at Loughborough University in September to study Automotive Engineering. Marko is excited to embark on a lifelong adventure to create a new source of fuel in the future! His advice to younger students is to set realistic targets for your subjects and spend time building lasting bonds and friendships with your peers as you will rely on them for support along the way. Marko praised the incredible teachers from the moment he started at CCF and stated that they not only help you to secure the grades you need they also guide you to develop the skills that you’ll need to get into your chosen field or career pathway.

My journey at CCF has given me some of my greatest memories and I have achieved more than I ever thought possible. This is because of the teachers and the learning culture CCF have created and I couldn’t be more grateful. 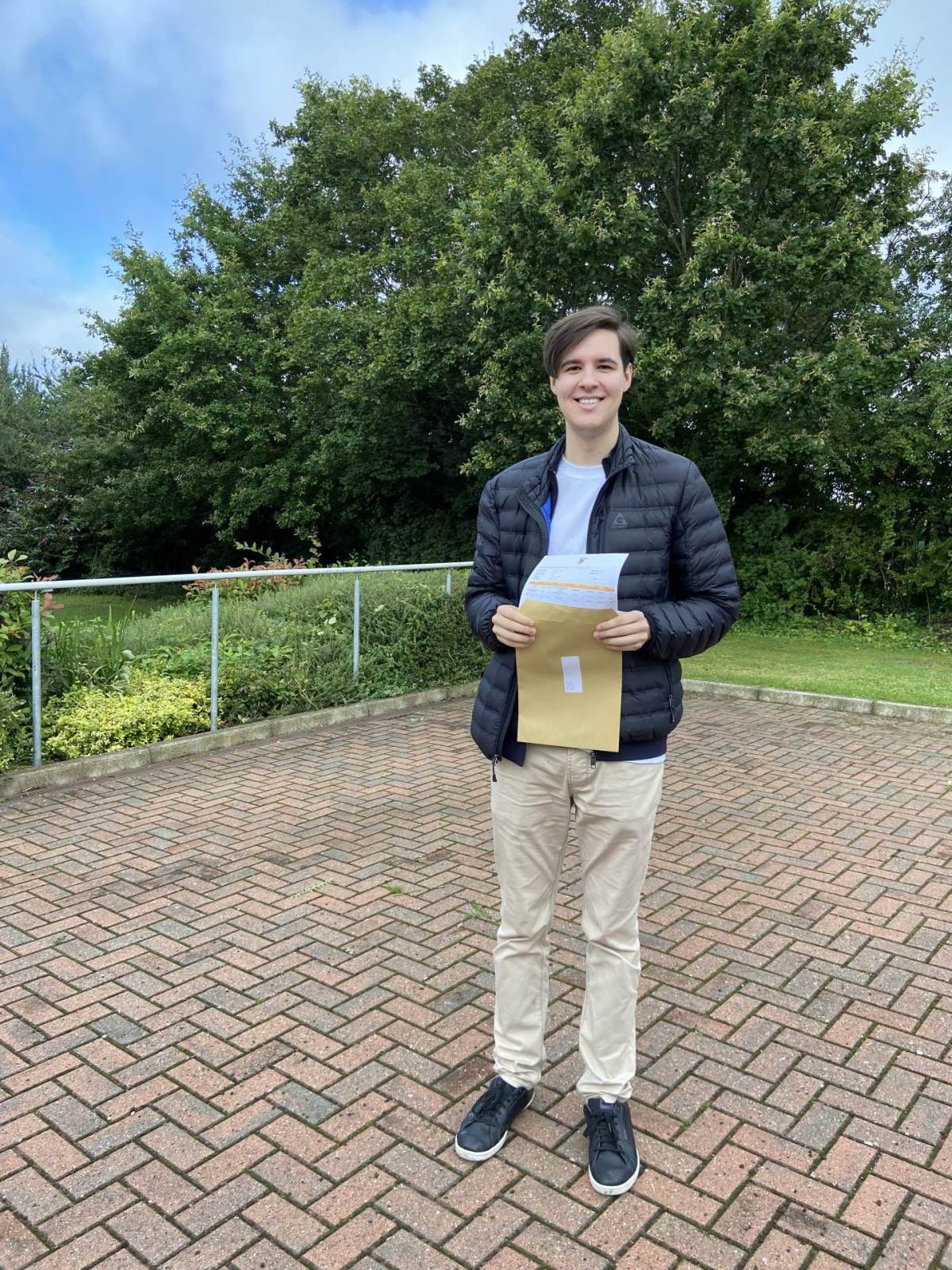 Jasper secured a fabulous four A*s in his A Levels in Maths, Further Maths, Physics and Computer Science. This A* student is taking a gap year before taking up his place at Imperial College London to study Computing (Artificial Intelligence - AI). During his gap year Jasper is planning to work in computing at both Imperial, developing a system for computerising question and analysing results, whilst also working part-time as an ICT technician at CCF. Jasper has ambitious plans to work for Google DeepMinds Technologies and ultimately start his own AI company.

CCF teachers really encouraged me at both an academic and personal level, way beyond the curriculum. My advice to younger students is study SMART not hard and concentrate on techniques that work for you. 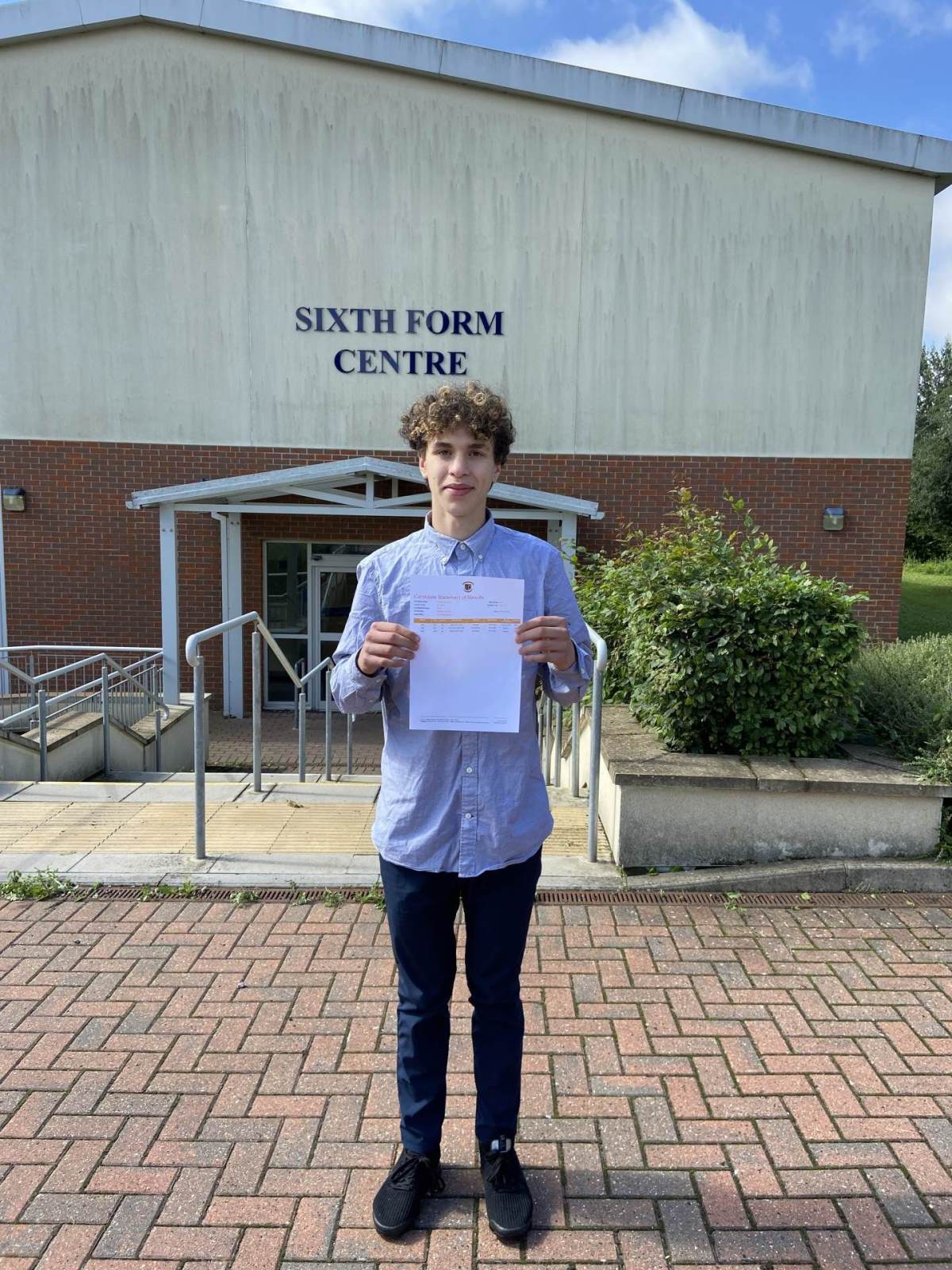 Younes achieved three ‘ology’ A Levels with two As in Psychology and Sociology and a B in Biology. Younes also achieved a B in the Extended Project Qualification with an essay on ‘How human nature affects marine ecosystems’. He will now go on and study Marine Biology at either Newcastle or Exeter. His ambition comes from a fascination with nature and a love of methodology and history, and Younes wants to pursue a unique career as a Marine Archaeologist.

Wow - I am ecstatic! The staff at CCF go above and beyond and have supported me in every single way – more than I could have ever asked for. Nothing phases these remarkable teachers – they made us all believe that everything is possible. 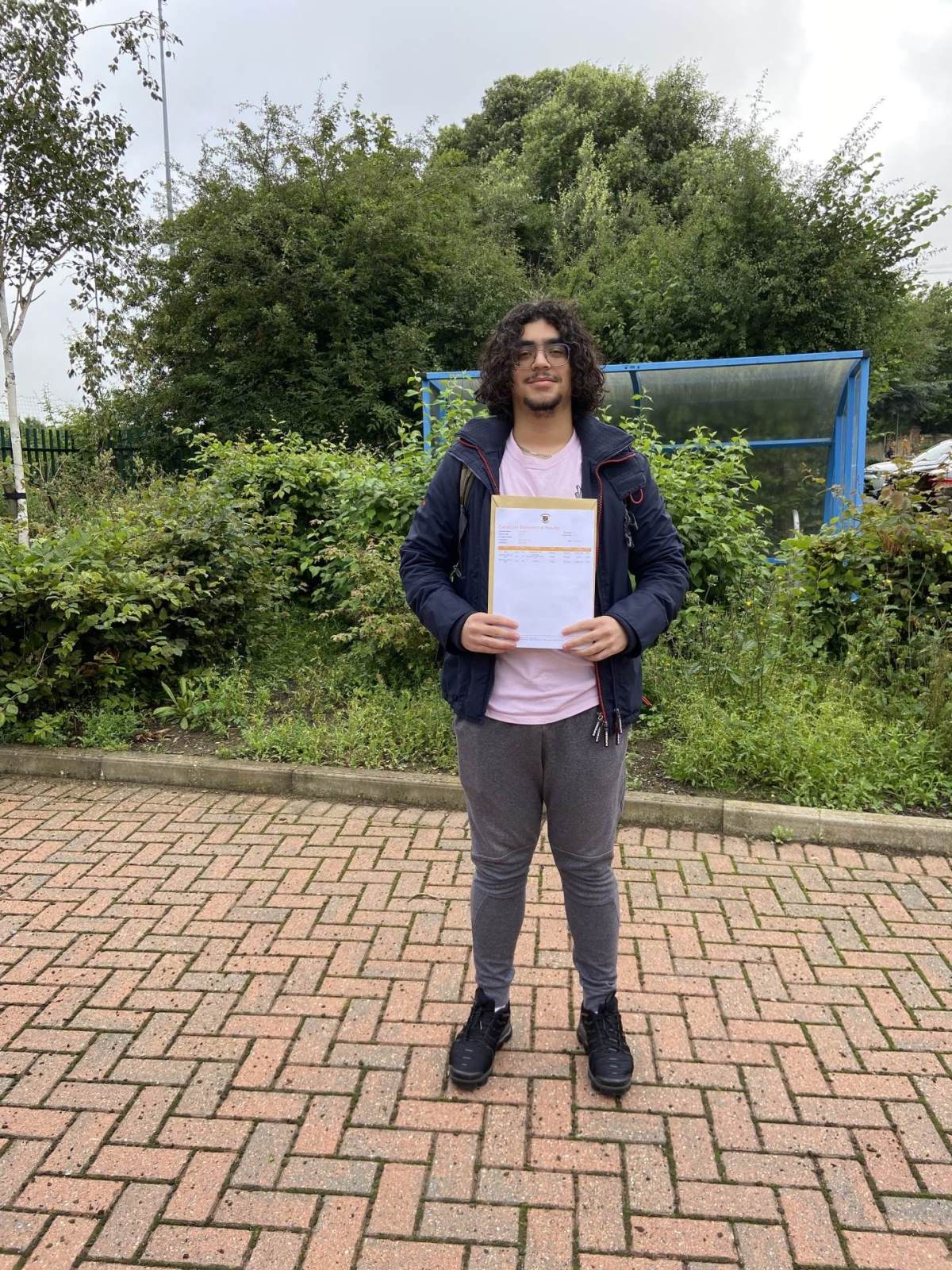 Kian secured an incredible 3 As at A Level in Chemistry, Further Maths and Physics as well as a further A in Maths an impressive year early. Kian is excited to be joining UCL in September to study Physics. He can’t wait to begin the next stage at UCL and has big dreams of becoming an Astronaut in the future.

CCF is the best journey I could of ever imagined. Not only have I met friends for life but I have managed to achieve my dream of attending a top university to study the field that I am most passionate about. The teachers at CCF are beyond outstanding, they care about each student’s wellbeing and success and do everything in their power to help you to get to where you want to be. 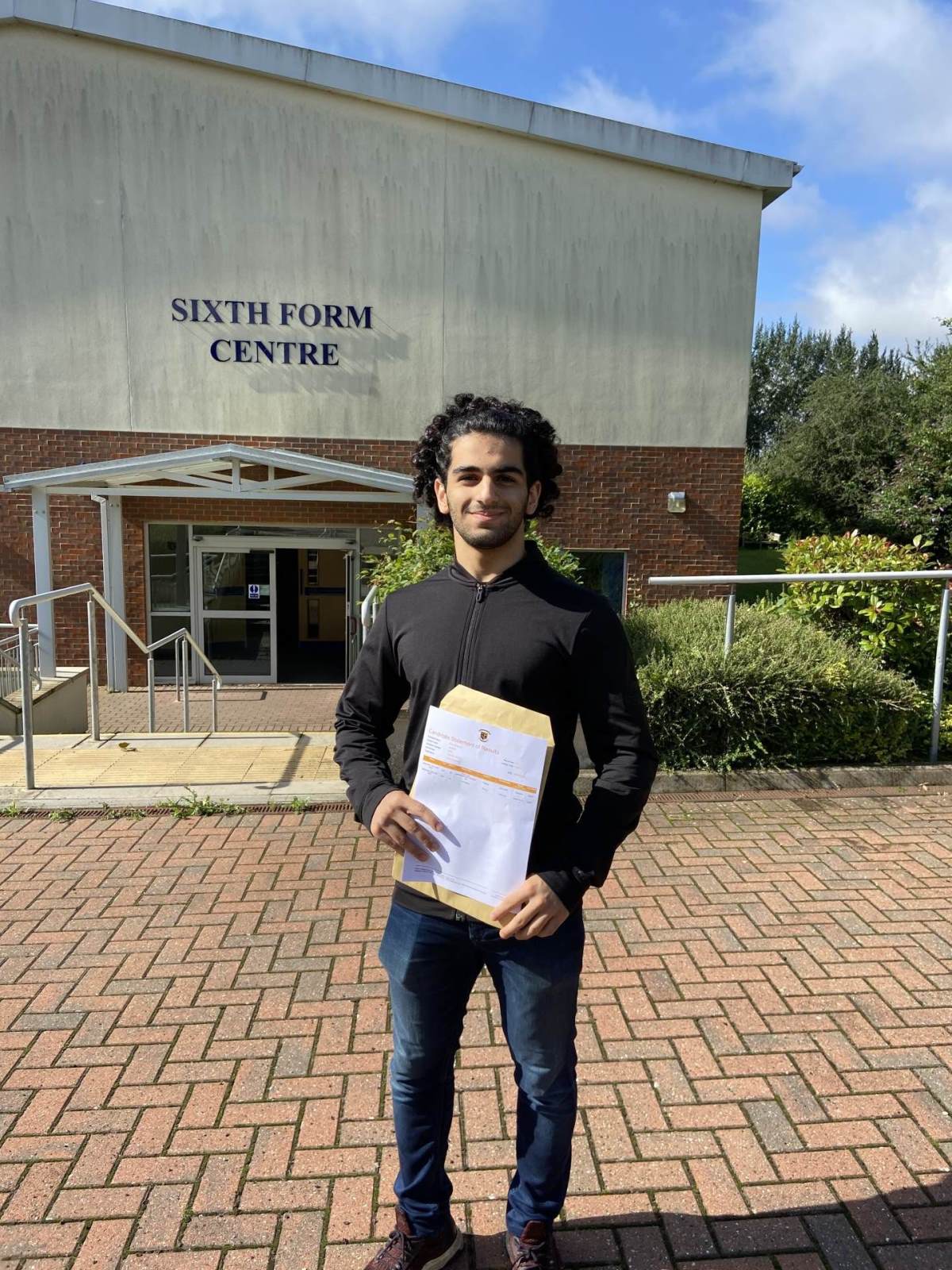 Erfan attained a total of three As in his A Levels in Physics, Maths and Further Maths; achieving the A in Maths a whole year earlier, in Year 12. Erfan will be studying Maths at UCL and in terms of a career path he said that it will probably be one that doesn’t even exist yet.

The teachers at CCF have been inspirational within the most supportive of environments - I couldn’t have asked for any more guidance and advice. His advice to younger students is aim for the highest and go for what you want and not what others tell you. 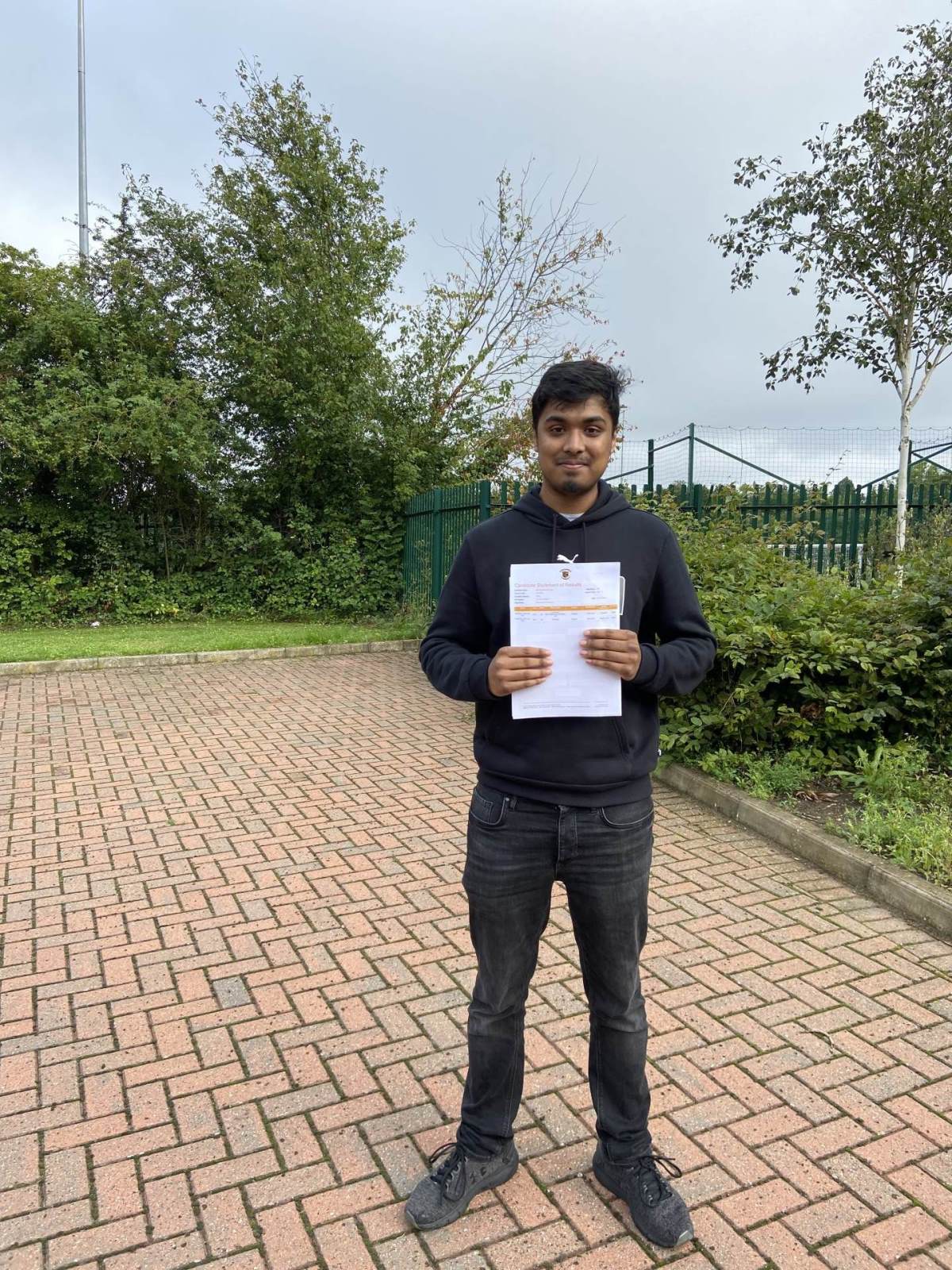 Mohammed secured three A Levels: an A in Maths and two Bs in Physics and Further Maths. Mohammed will be studying Aerospace Engineering at the University of Manchester and his lifelong dream is to work in aerospace and improving aeronautics. One of Mohammed’s greatest achievements at CCF was gaining a place on the prestigious King’s College K+ programme in Year 12 that helped support his university application and provided the skills needed to reach his full potential as an undergraduate student.

I can’t thank the teachers and staff at CCF enough, we were always their priority and they worked tirelessly, especially during the pandemic, and I will be forever grateful. I’m aiming high now and my ambition is to one day work for NASA!

Kian, former Holy Trinity Primary School pupil, secured an incredible 3 As at A Level in Chemistry, Further Maths and Physics as well as a further A in Maths an impressive year early. Kian is excited to be joining UCL in September to study Physics and has big dreams of becoming an Astronaut in the future.

CCF is the best journey I could of ever imagined. Not only have I met friends for life but I have managed to achieve my dream of attending a top university to study the field that I am most passionate about. The teachers at CCF are beyond outstanding, they care about each student’s wellbeing and success and do everything in their power to help you to get to where you want to be. 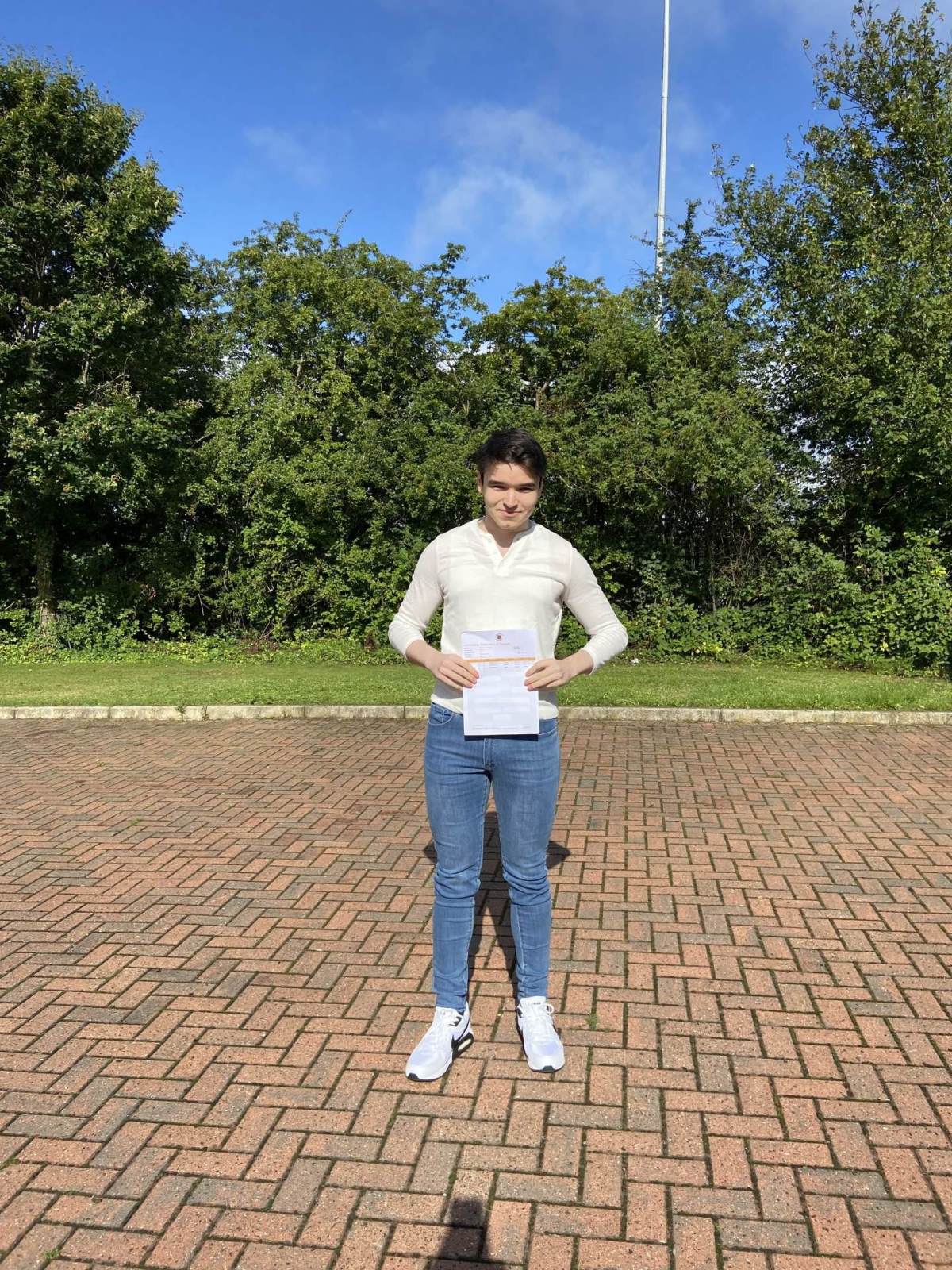 Former Garden Suburb Primary School pupil, Alex achieved a tremendous three A Levels: A* in Maths and Biology and an A in Chemistry and is going to study Medicine at King’s College London. He credits the teachers at CCF for his success, and the staff and students he has met on his educational journey who have supported him all the way. Alex wants to explore the field of Neuroscience but is still unsure as to what he will specialise in; however, what he does know is that he wants to become top in his field. Alex’s advice to younger students includes:

Do your research on what you really want to study, and then study really hard. 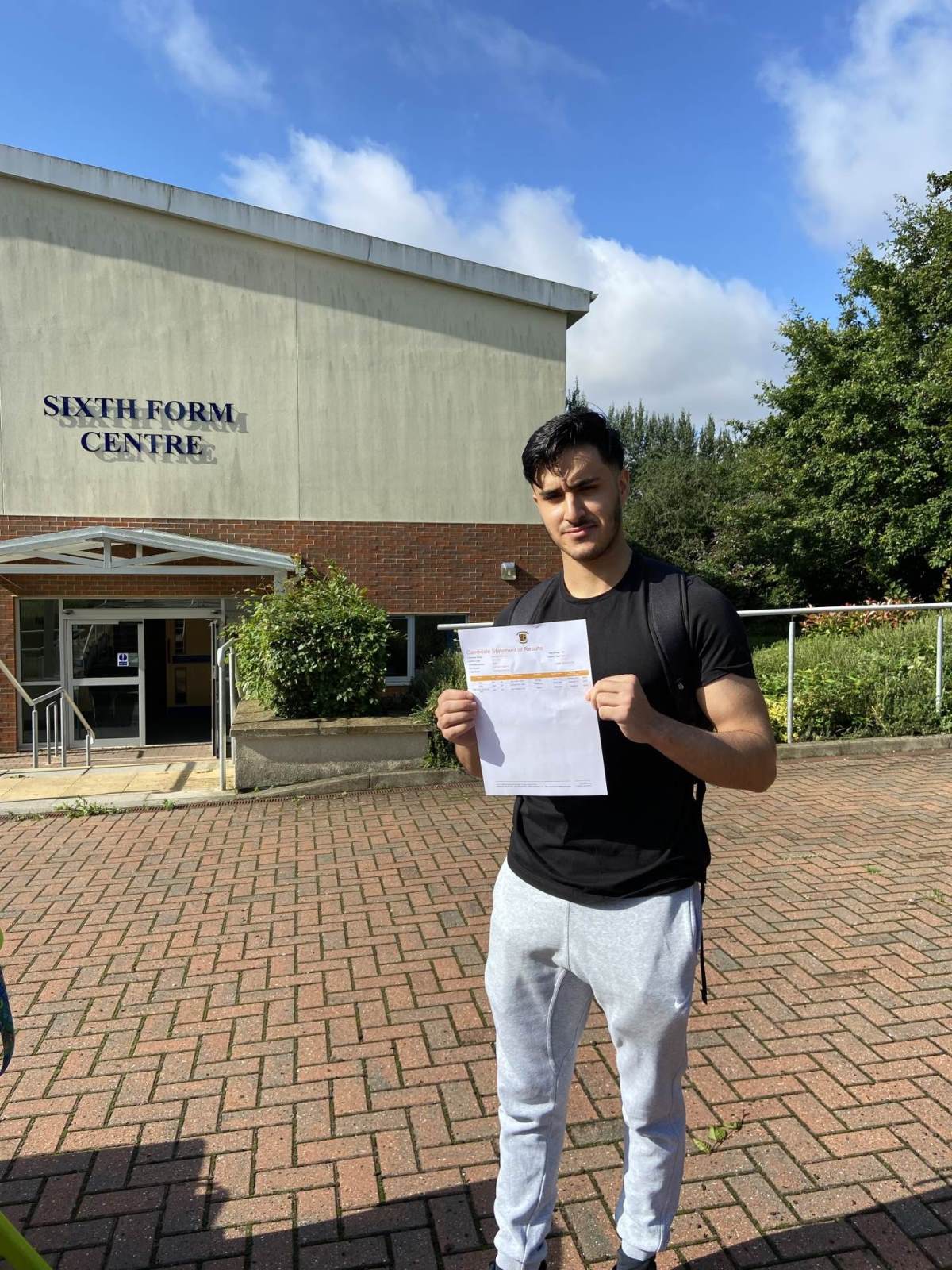 Sameer secured a run of As in his A Levels: A* in Maths and an A in Biology and Chemistry. Sameer will be reading Economics at the University of Warwick; his life dream is to secure a career in investment banking.

The extraordinary environment created at CCF Sixth Form has been exceptional from the support of all the staff to the friendly atmosphere; we were all academically motivated to do our very best. 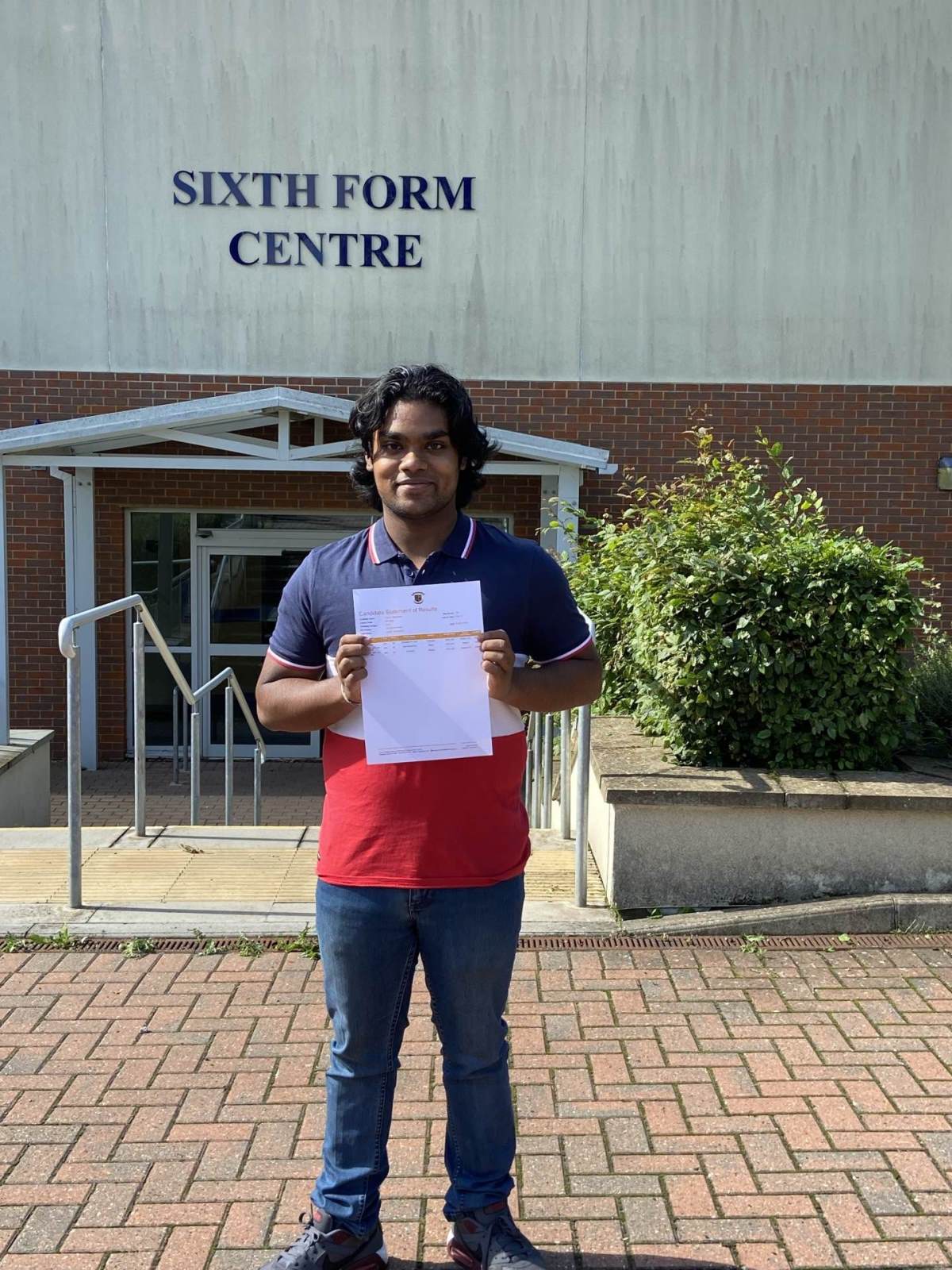 Jayidu achieved three A Levels: an A in Chemistry and Maths, and a B in Physics. Jayidu will be studying Aerospace Engineering at the University of Nottingham. He originally wanted to be a pilot but now wants a career in designing aircrafts, jets airplanes and helicopters. Jayidu gave us his reflections and advice for others:

I learnt so much being a Prefect at CCF and I was also involved in a variety of sports team that won regional tournaments. My advice is to study hard from day 1 of Sixth Form and stay on track – the specialist teachers are always there to help and guide you. 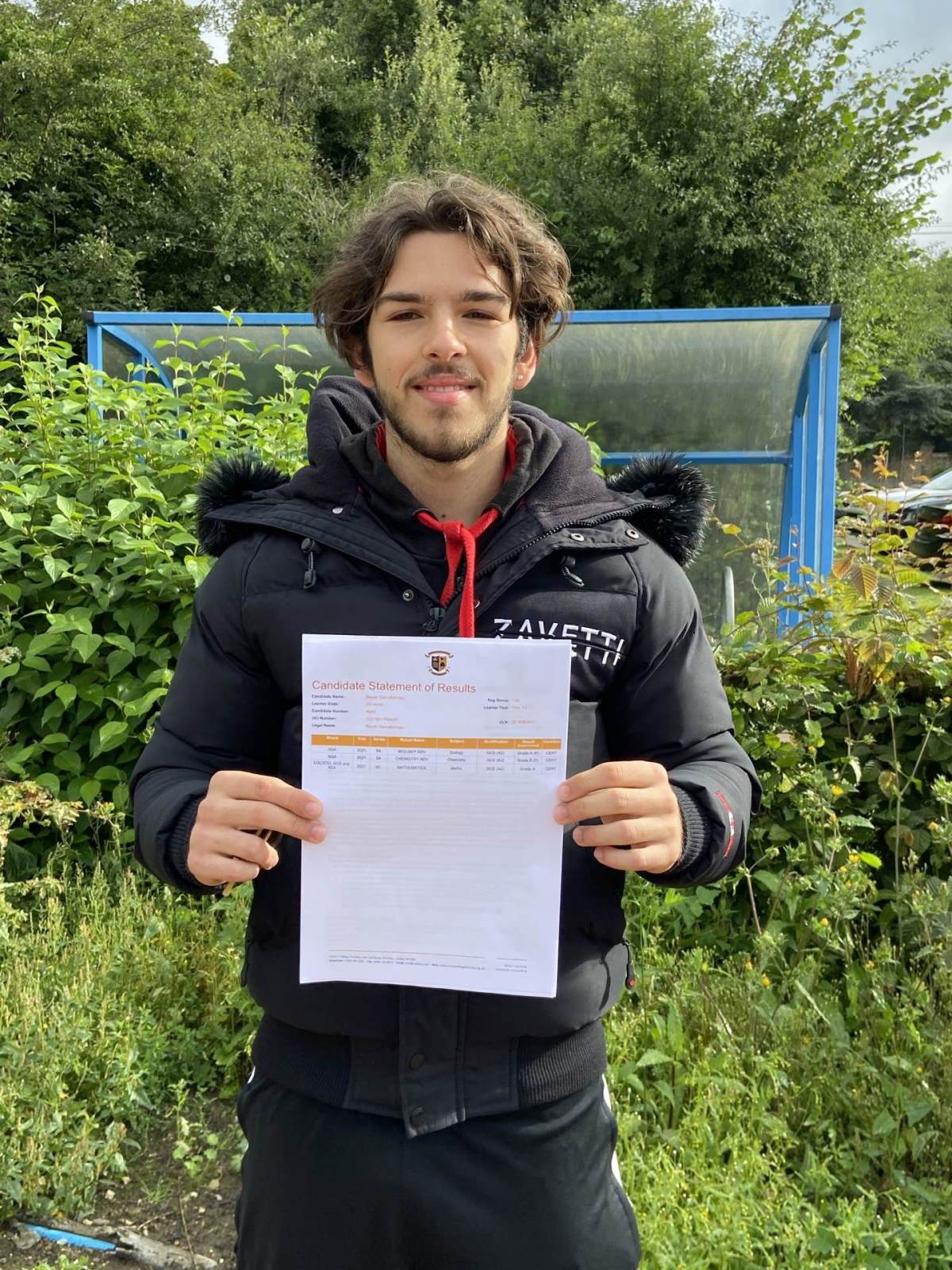 Bayer, former Garden Suburb Primary School pupil, secured three A Levels: an A in Biology and Maths, and a B in Chemistry. Bayer will be studying Biochemistry at King’s College London and has ambitions to be a Biochemist. He credits the supportive teachers for his excellent results and for the nurturing and caring environment at CCF Sixth Form. 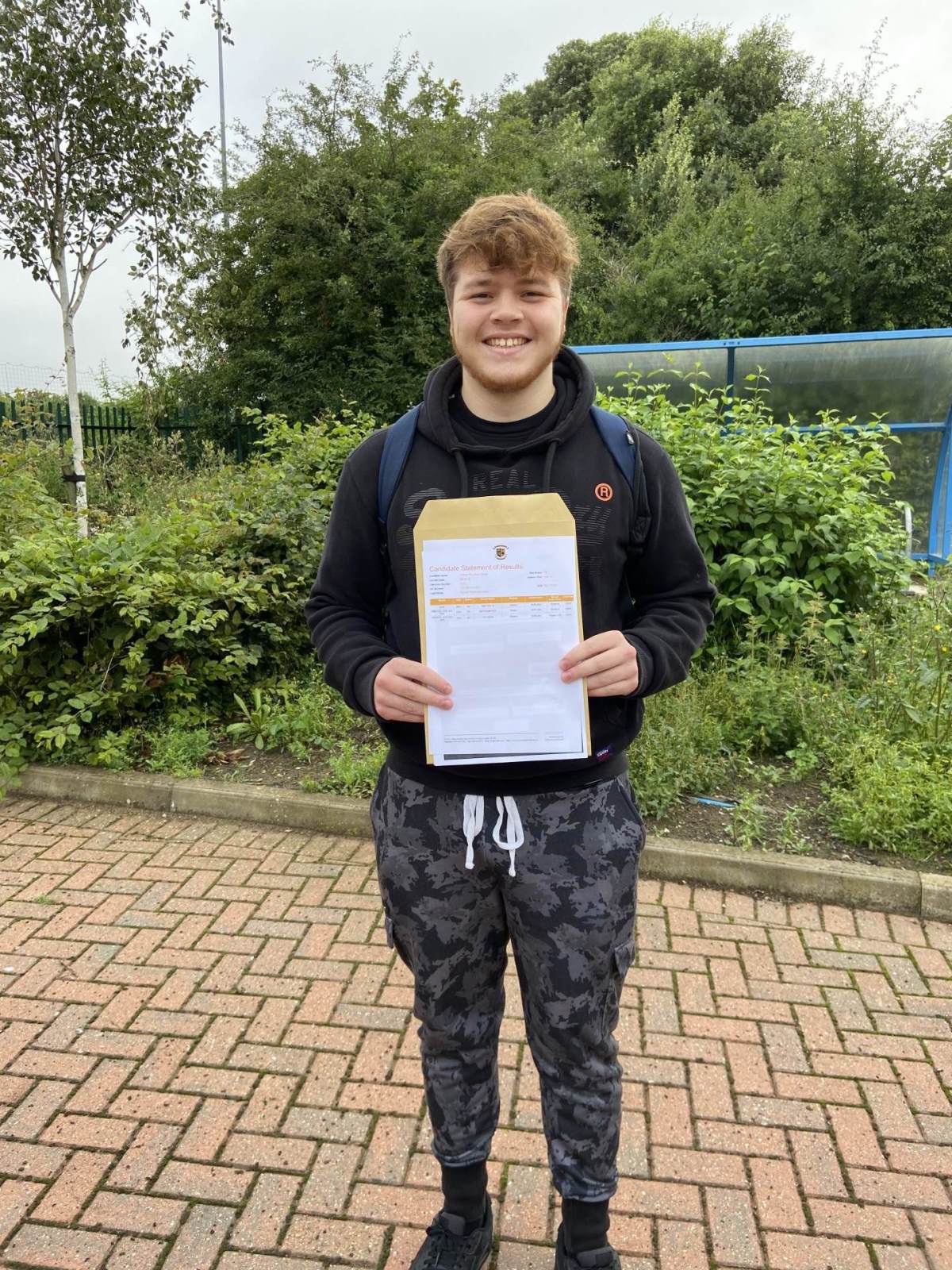 Gabriel, former Frith Manor Primary School pupil, is delighted to have achieved 3 As in History, Maths and Physics. He is looking forward to taking a gap year to explore different opportunities before applying for a place at a Russell Group university to study Civil Engineering. Gabriel’s advice to younger students is to ask your teachers for support the moment you start and follow their lead as they want you to reach your goals as much as you do.

I can’t thank the teachers at CCF enough for inspiring me and for offering fantastic support from the moment I started my Sixth Form journey. 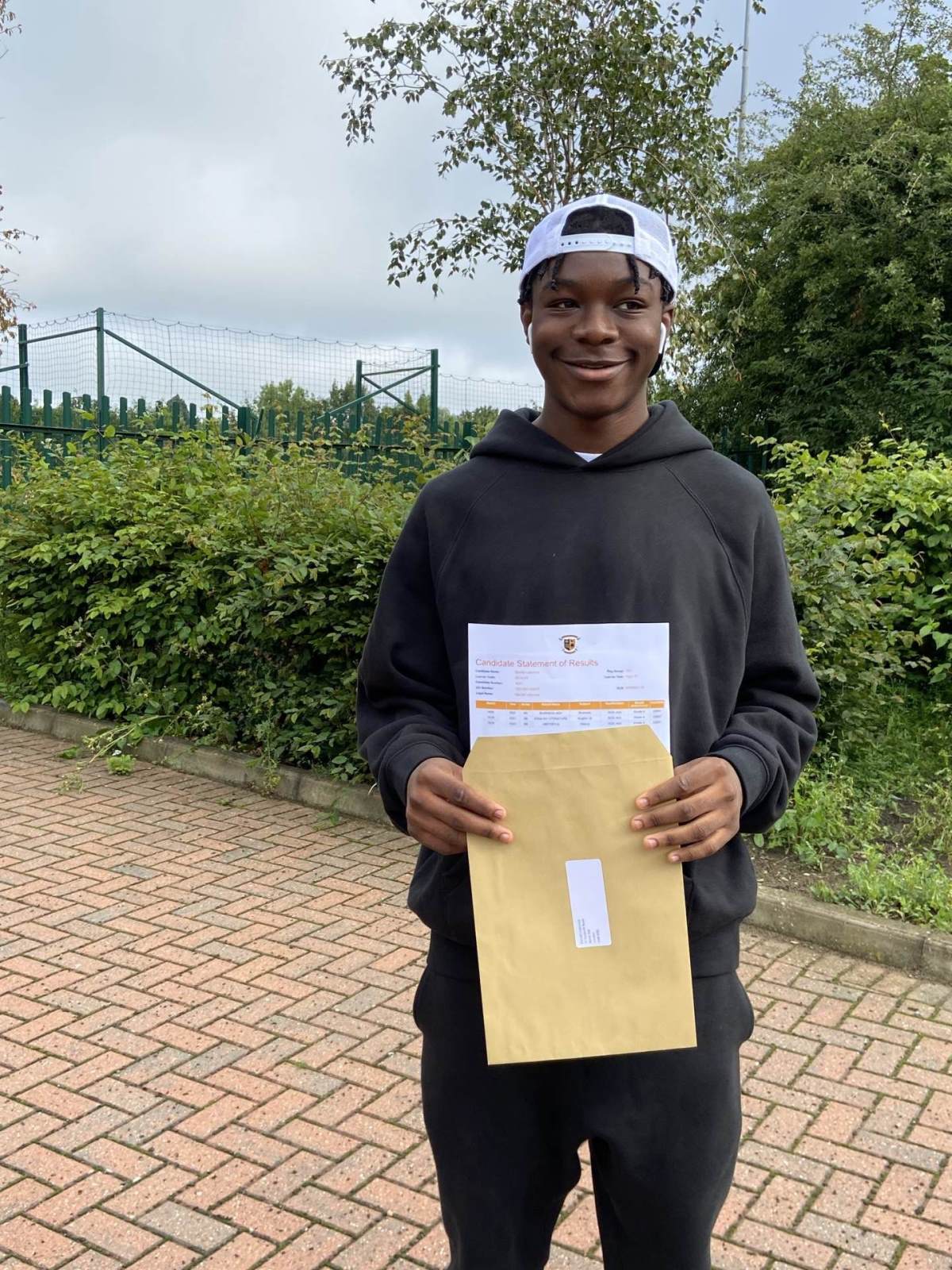 Daniel attained an incredible 3 As in Business Studies, English Literature and History. He can’t wait to begin his journey at Queen Mary University of London in September to study Business. David is looking forward to what comes next but stated he couldn’t of achieved his results without the dedicated staff team at CCF.

My advice to others would be to start revising early, make use of the vast resources and never give up. 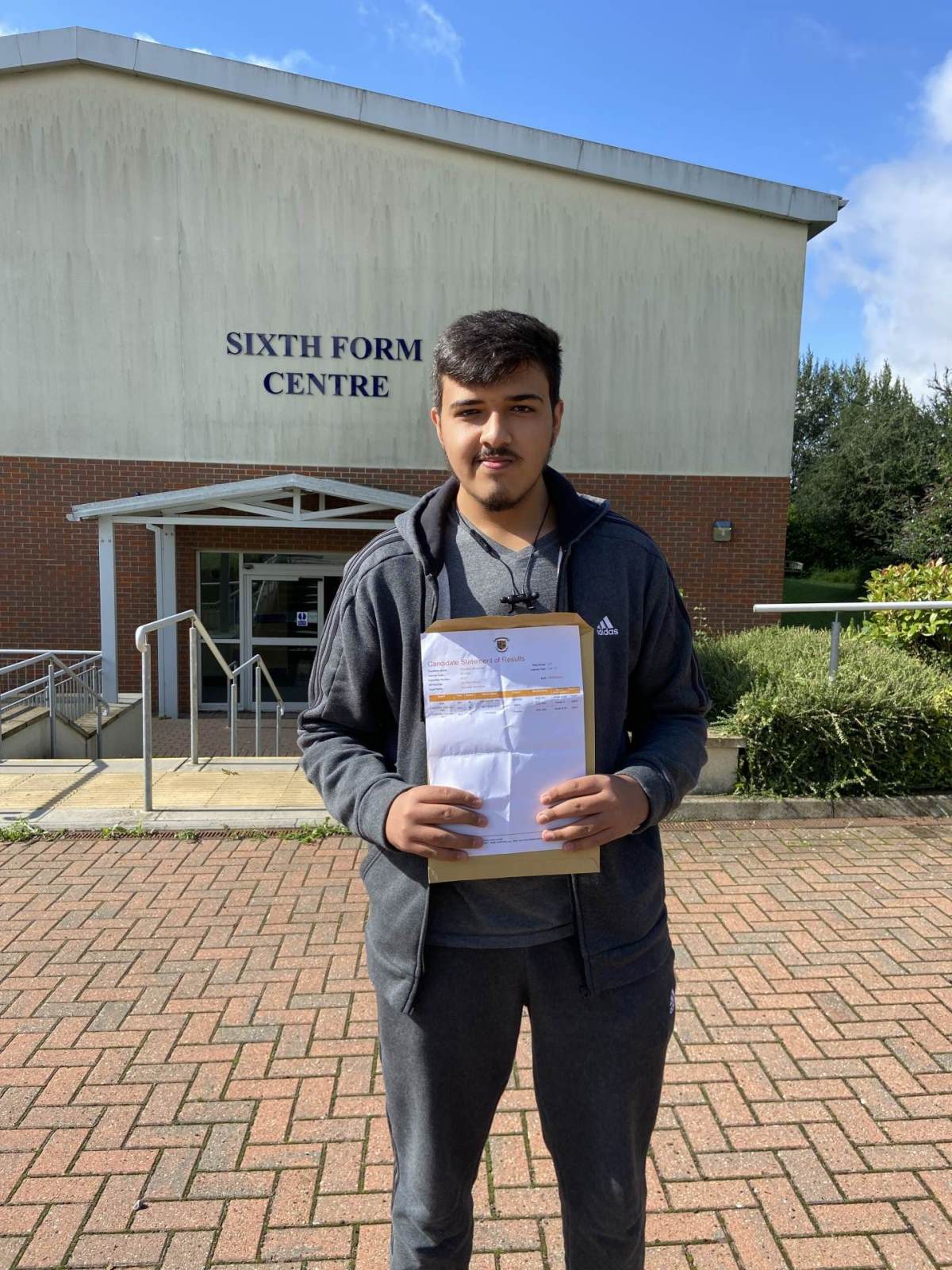 Obidullah achieved three A Levels: an A* in Maths and two Bs – one in Physics and one in Chemistry. Obidullah will be studying Civil Engineering at the University of Sheffield. His ambition is to run his own civil engineering business. The former Sunnyfield Primary Schoool pupil has had challenges in his educational life and shared these words of wisdom:

I’ve been at my lowest point but my advice is believe in yourself and see what you can achieve. The teachers at CCF have been amazing and I have turned things around from when I was failing in Year 8 to now achieving these results. Remember you can always turn your life around mentally, physically and emotionally. 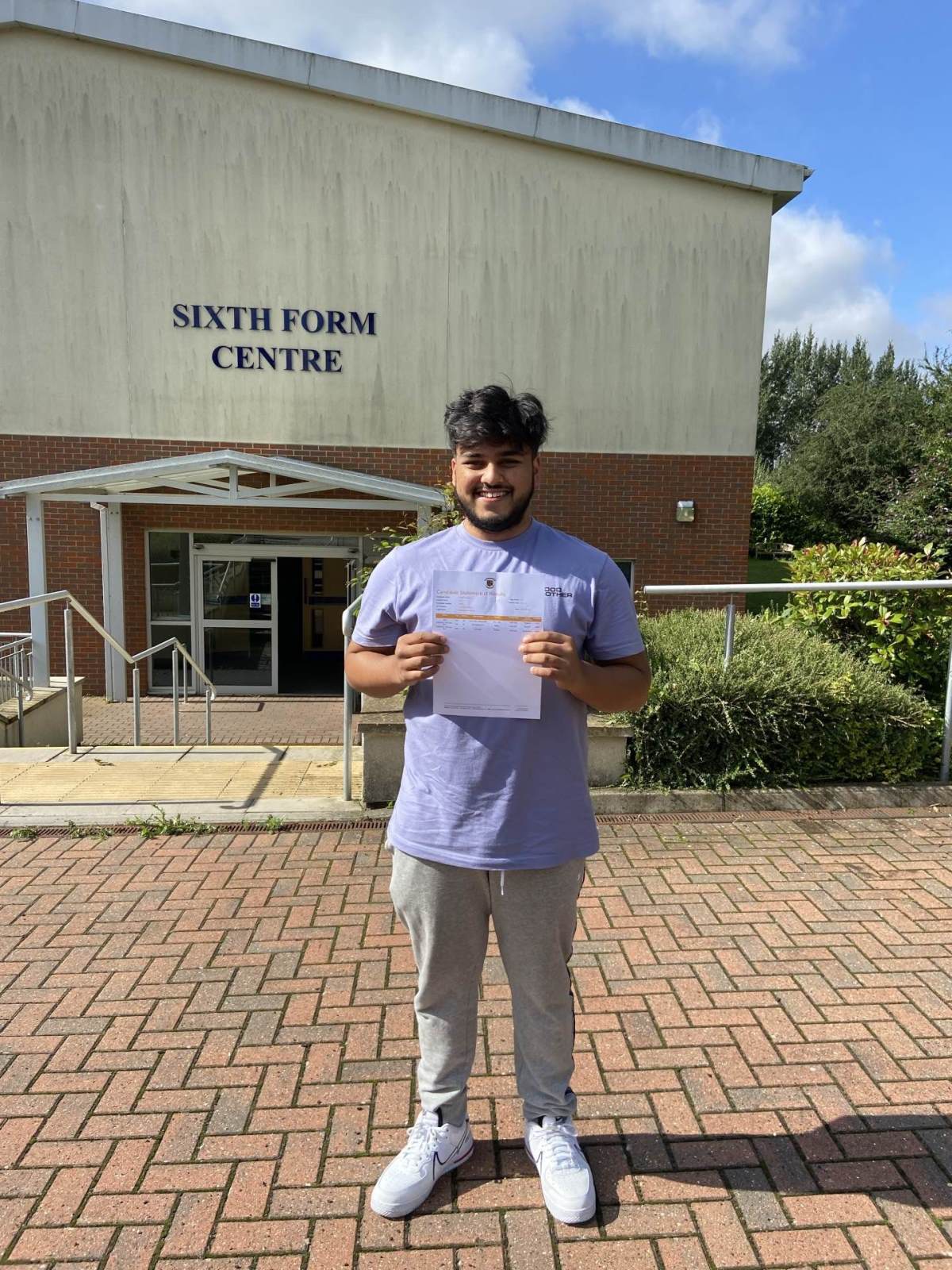 Sibtain, former Dollis Junior School pupil, secured an impressive three A Levels with an A in English Language and two Bs in Physics and Maths. Sibtain will be studying Mechanical Engineering at Queen Mary University London. His ambition is to work in the car industry and run his own company. Sibtain provided this advice to other younger students:

I am a resilient and determined person and when I under-achieved in Year 12 I retook the year. I have developed as a person and can’t thank the teachers enough for their immense support and the sheer quality of teaching. My advice is never slack off and keep up the pace because it’s not going to be easy, but so rewarding when you do get the results. 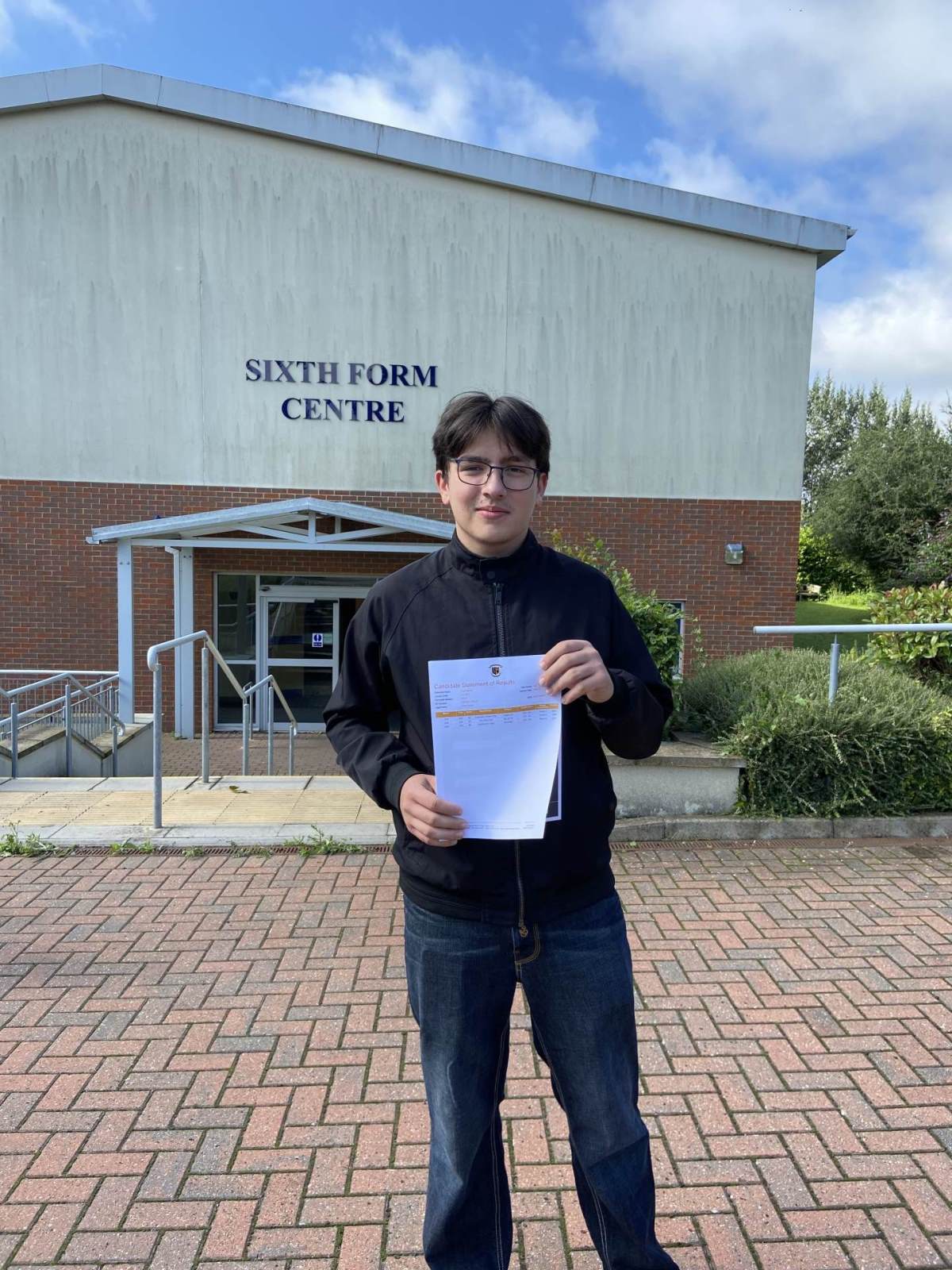 Kais achieved three A Levels in English Literature, Politics and Sociology and also secured the Bronze Duke of Edinburgh Award during his time at CCF. The former Edgware Junior School pupil will now be studying English Literature at the University of Essex and has ambitions to be a Barrister. He credits the small supportive community for his drive and success during his time at CCF Sixth Form. 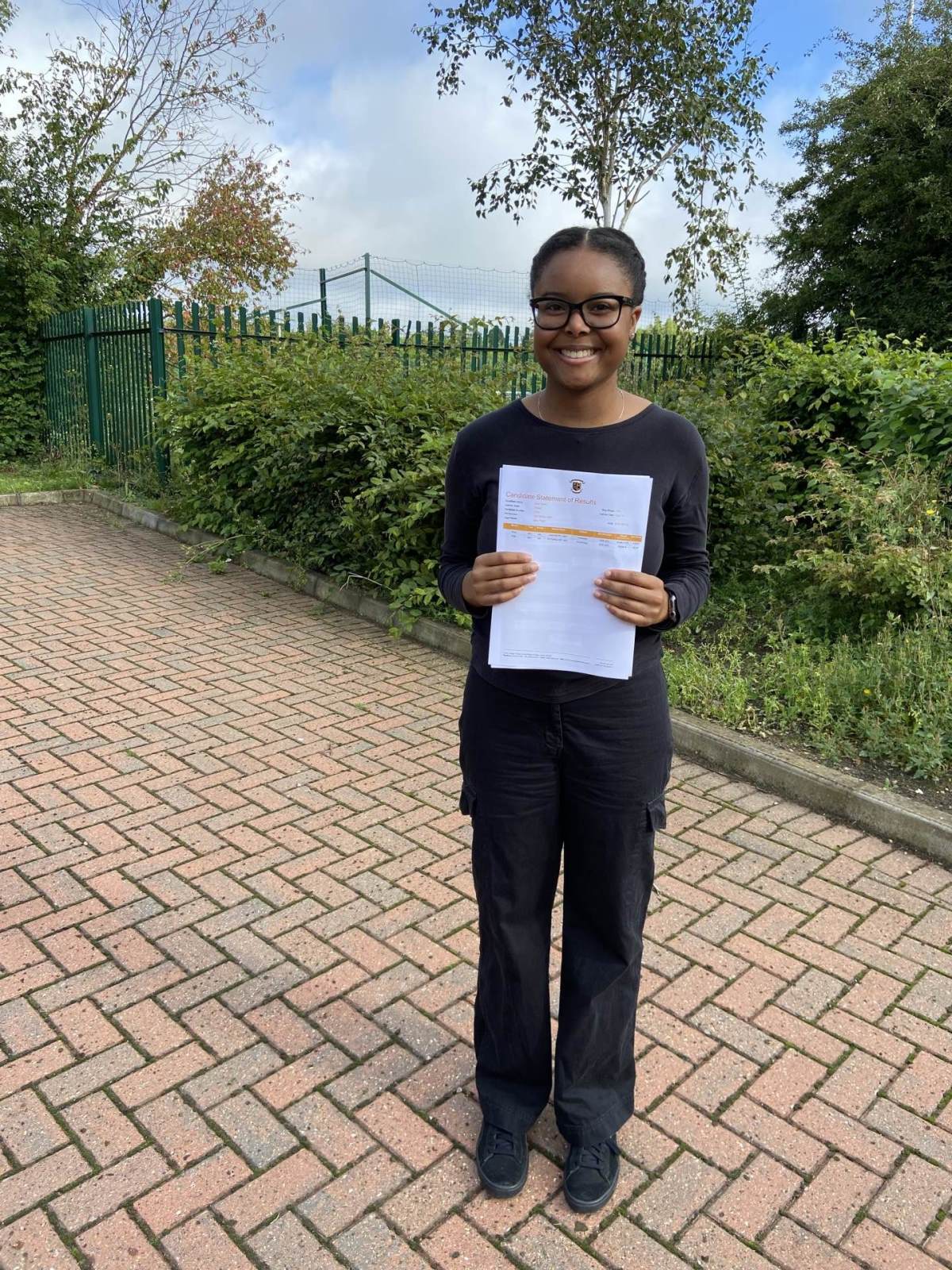 Zara secured three strong A Levels in Psychology (A), History (A) and Chemistry (C). Zara will now by reading Psychology at the University of Sussex and has ambitions to be a Psychotherapist. Her advice to other younger students include:

Never give up, keep trying! The environment at CCF Sixth Form is so friendly and supportive – staff and students are always there for each other. 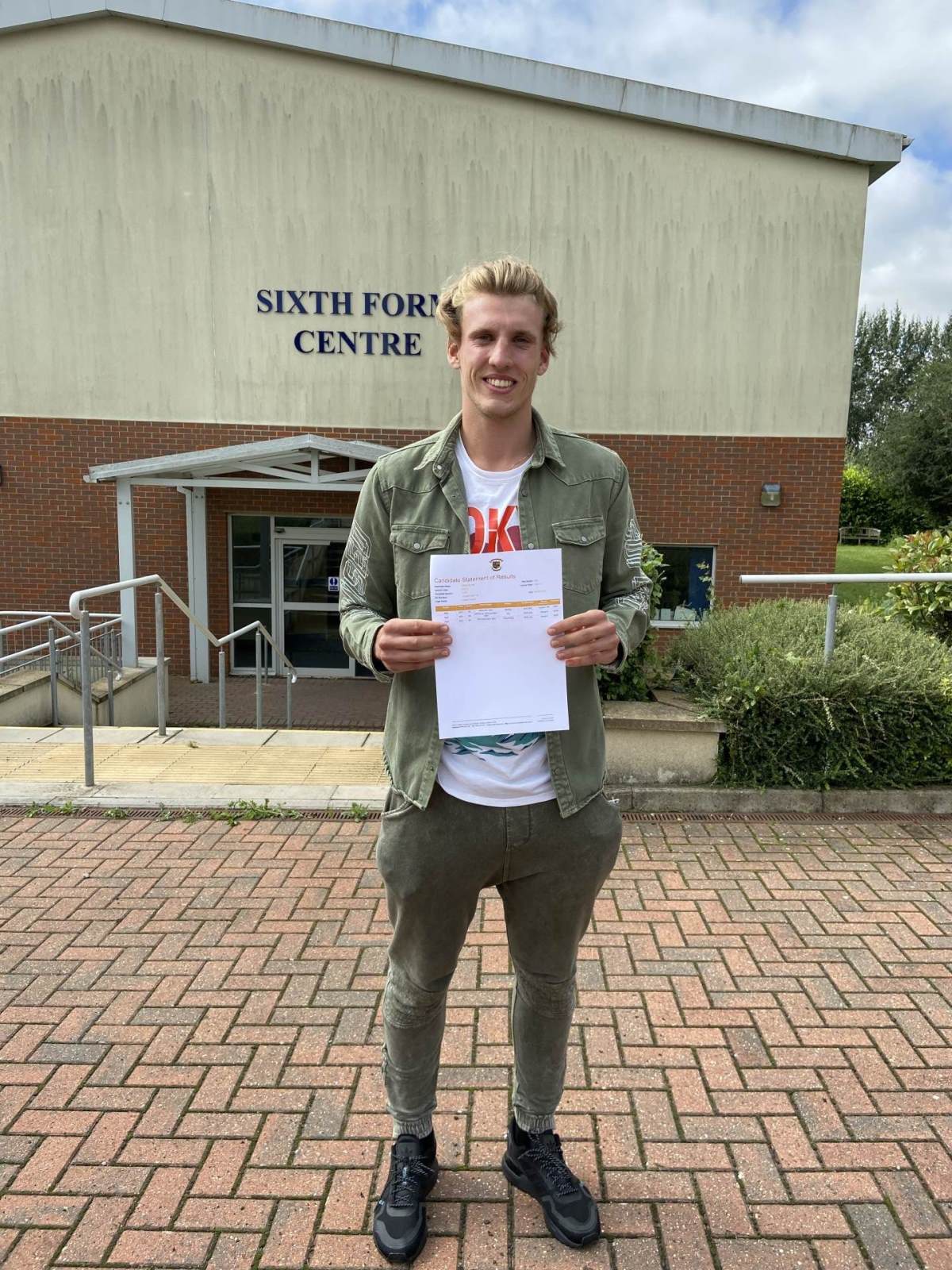 Oskar (former Rosary RC Primary School pupil and Finchley Catholic High School student) joined the CCF Basketball Academy in Year 12 and achieved three A Levels: an A in PE and two Cs in Psychology and Biology. As part of Oskar’s next journey, he will be studying and playing basketball in Milan. He has been able to secure academic success whilst training up to 6 hours per day, 24/7. Oskar shared these comments:

Work hard and believe in yourself. CCF provided me with great teaching and taught me how to be independent. I am now planning to further my studies in Italy whilst building on my basketball skills – my aspiration is to play in the Paris 2024 Olympic Games.