Behind every set of GCSE results there is a personal story of hard work, commitment and perseverance. Here are some of their success stories: 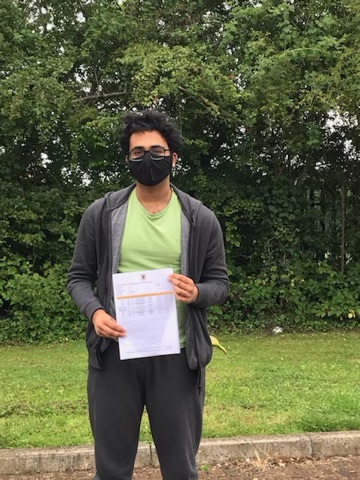 Ravi (Wessex Gardens) scooped a staggering 9 GCSE grade 9s across all subjects with a distinction in Spanish. Ravi will be staying on at CCF Sixth Form and will be studying Chemistry, Maths and Computer Science. His ambition is to work in the field of computers in the future. Ravi cites the deep understanding teachers have of their subjects for his success.

There is a real sense of community at CCF which makes it an enjoyable place to learn and grow as a person. The school has always helped me when I’ve struggled in class or fallen behind. I recommend younger pupils pay attention in lessons from early on; there is a lot of information that can become useful later. 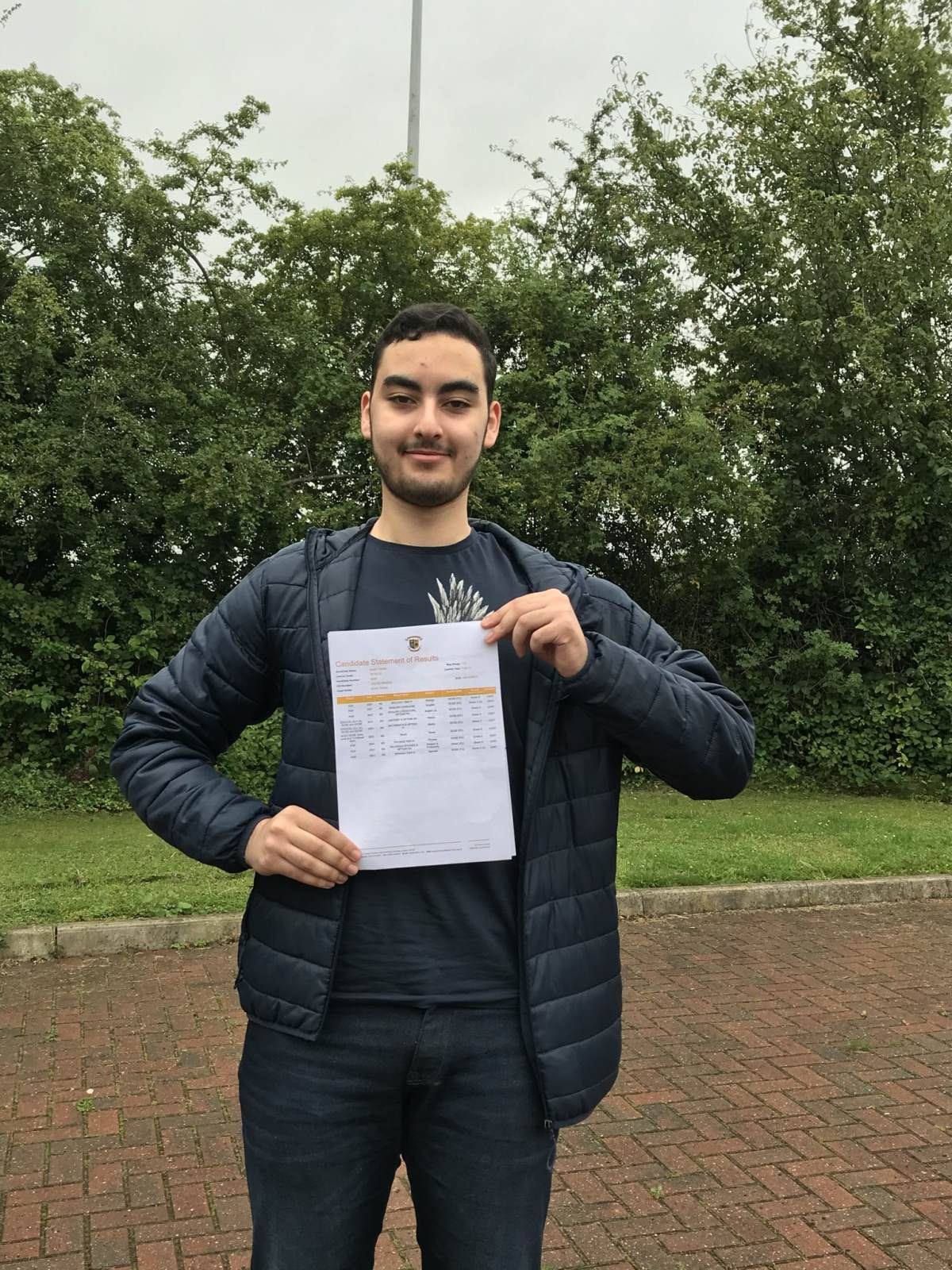 Adam (Brookland) secured 10 GCSEs: 9 grade 9s and 1 grade 8, with an early GCSE (grade 9) in Chemistry which he sat in Year 9. Adam will be staying on at CCF Sixth Form to study Maths, Further Maths, Physics and Chemistry. He is aiming high with ambitions to go to Cambridge, Imperial or UCL to study Aerospace Engineering.

I credit the amazing teachers and work environment at CCF; this has allowed me to become a far more focused individual. My message to younger pupils is look at what it takes to become the best and strive to be the best. 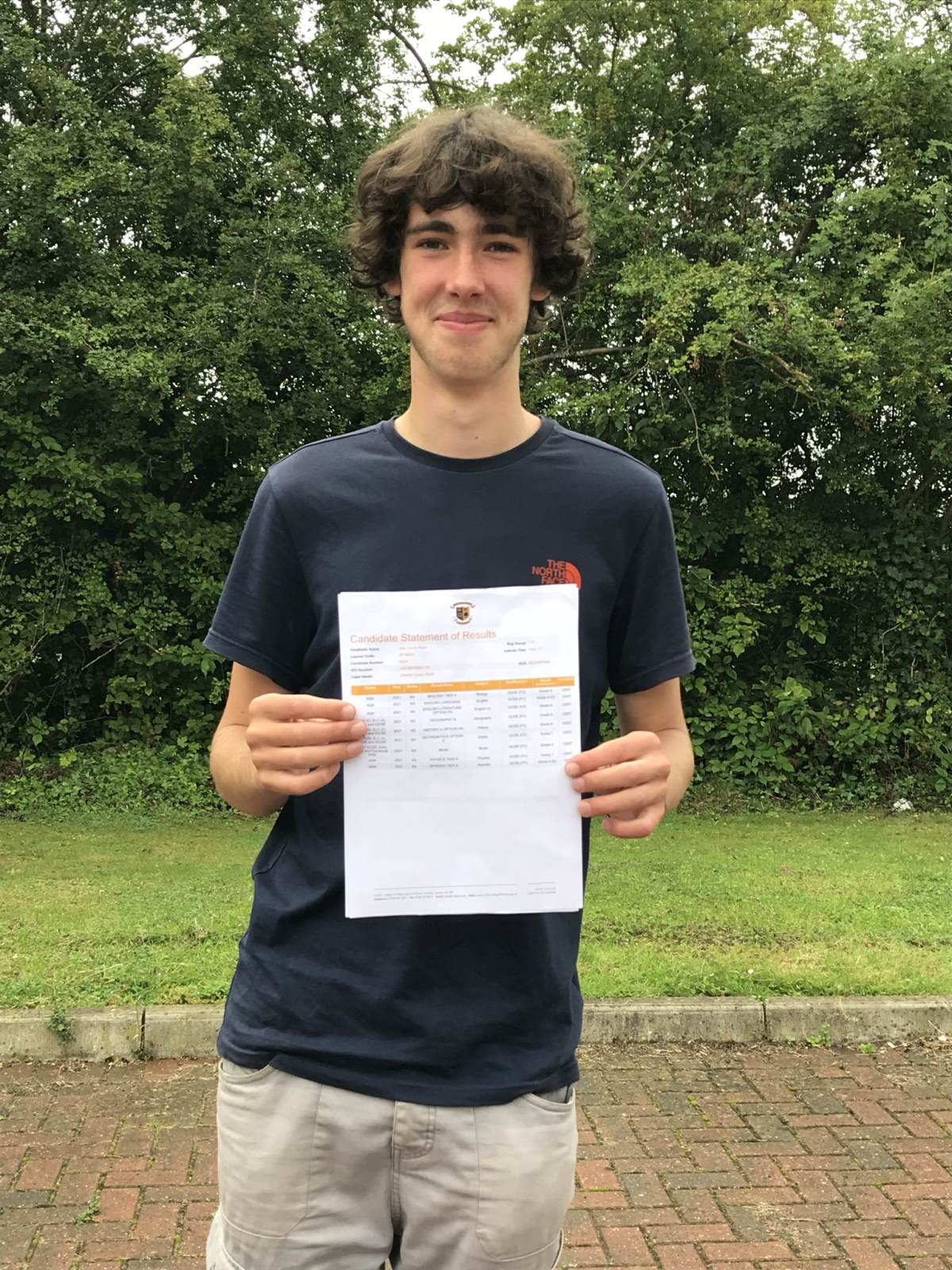 Joe (Garden Suburb) achieved a host of GCSEs including 9s in Geography, Music and English Language. Joe is still considering his future plans but has a strong interest in journalism and production arts. Joe talks highly of the teachers who have nurtured and supported him since Year 7 in a welcoming and friendly environment. Joe’s advice includes:

Always show the utmost respect to your teachers and they will go out of their way to support you. CCF has always provided a safe and supportive learning environment allowing pupils to achieve their dreams. 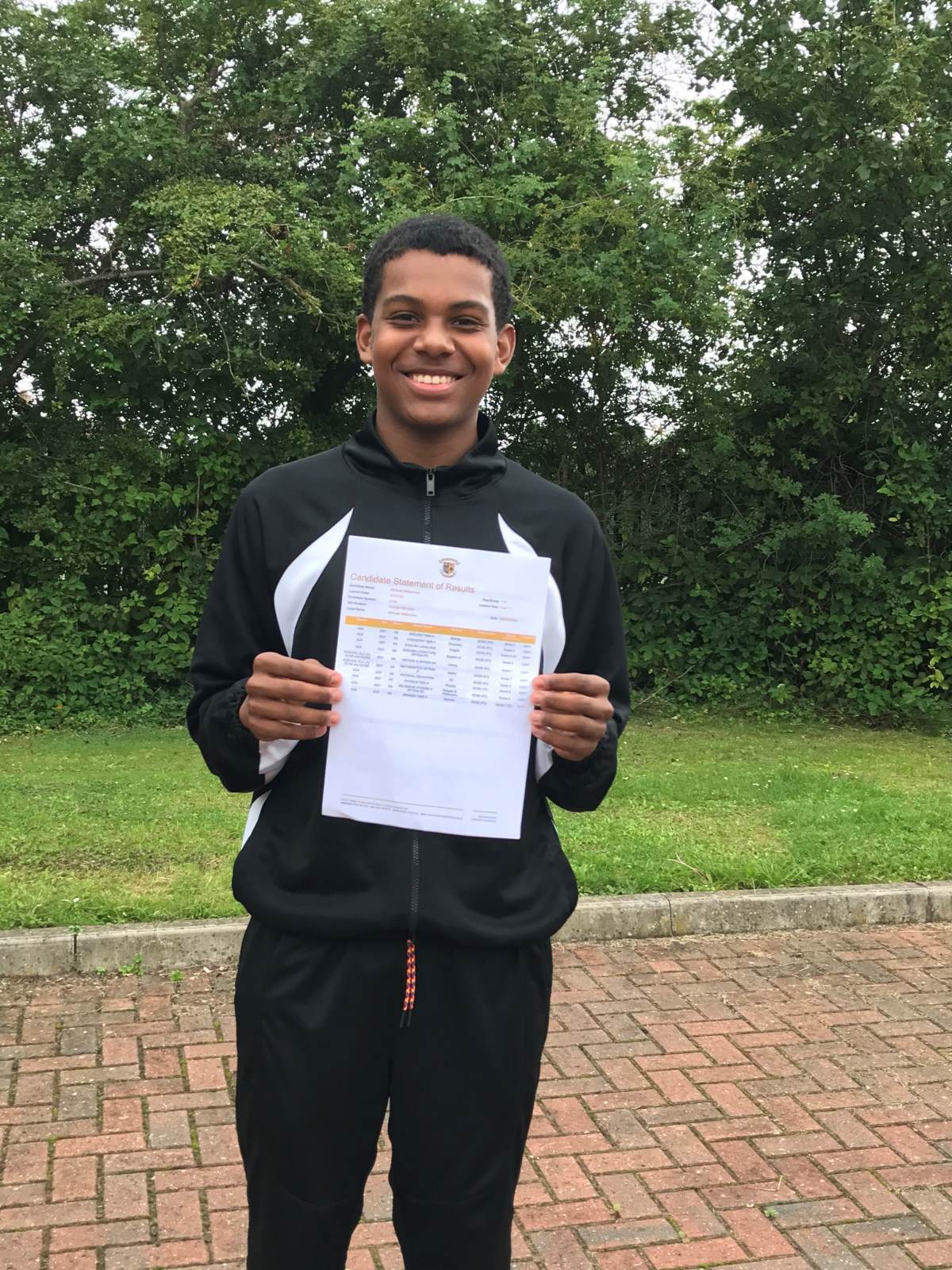 Michael (Garden Suburb) secured 10 GCSEs with grade 9s in PE and Religion & Philosophy. Michael will be going on to Sixth Form and then university with his sight fixed on playing professional basketball in the future. Michael is delighted with his results saying:

The teachers are very good at CCF and extremely supportive. The sports facilities are also amazing! 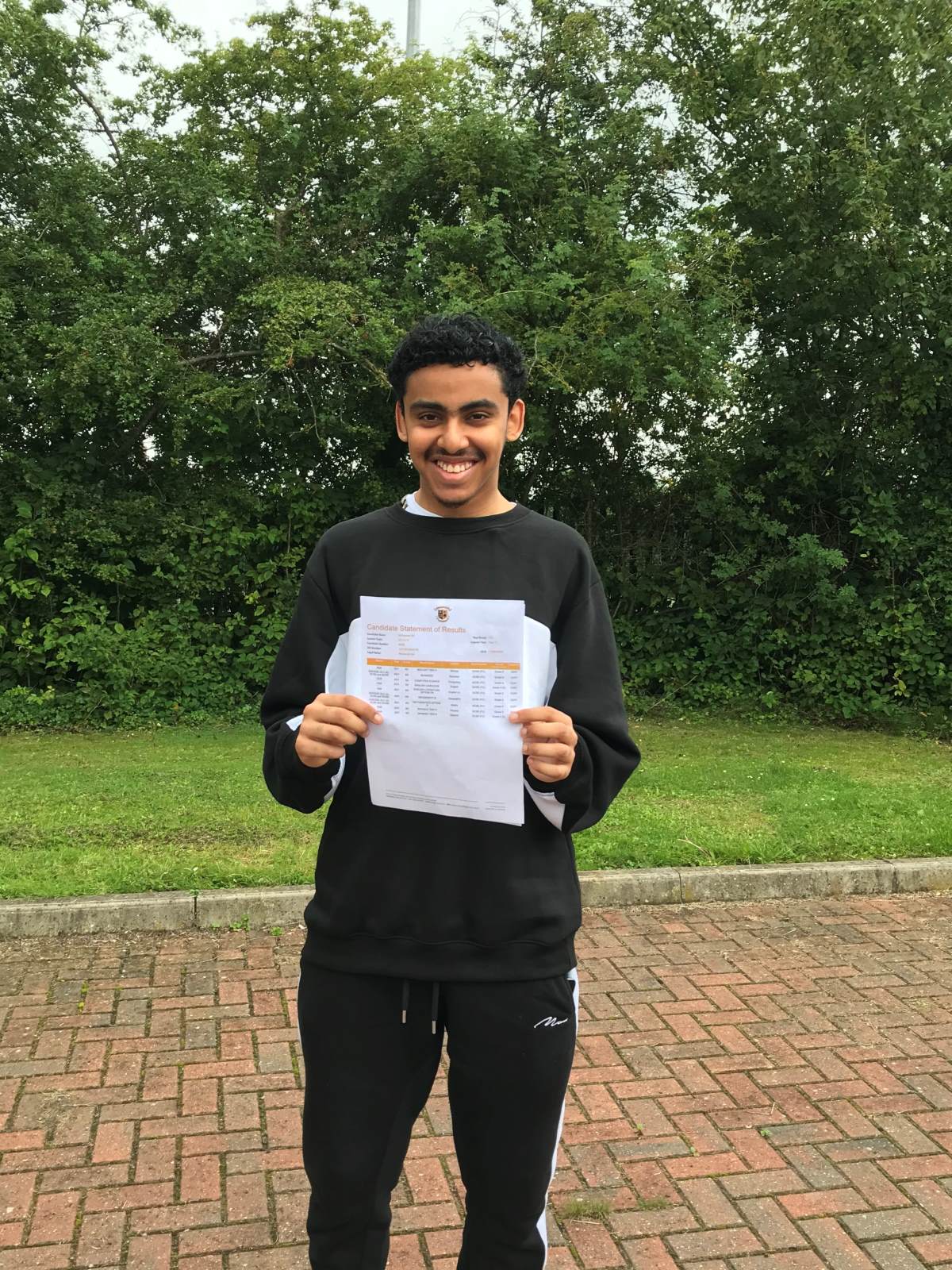 Mohamed (Manorside) achieved 10 GCSEs in total with grade 9s in Business, Geography, Maths, Physics and Spanish. Mohamed also secured a Chemistry GCSE (grade 8) in Year 9. He will by staying on at CCF Sixth Form to study Maths, Further Maths, Chemistry and Physics and wants a career in Finance. Mohamed’s advice is simple:

Be motivated to be the best you can be. 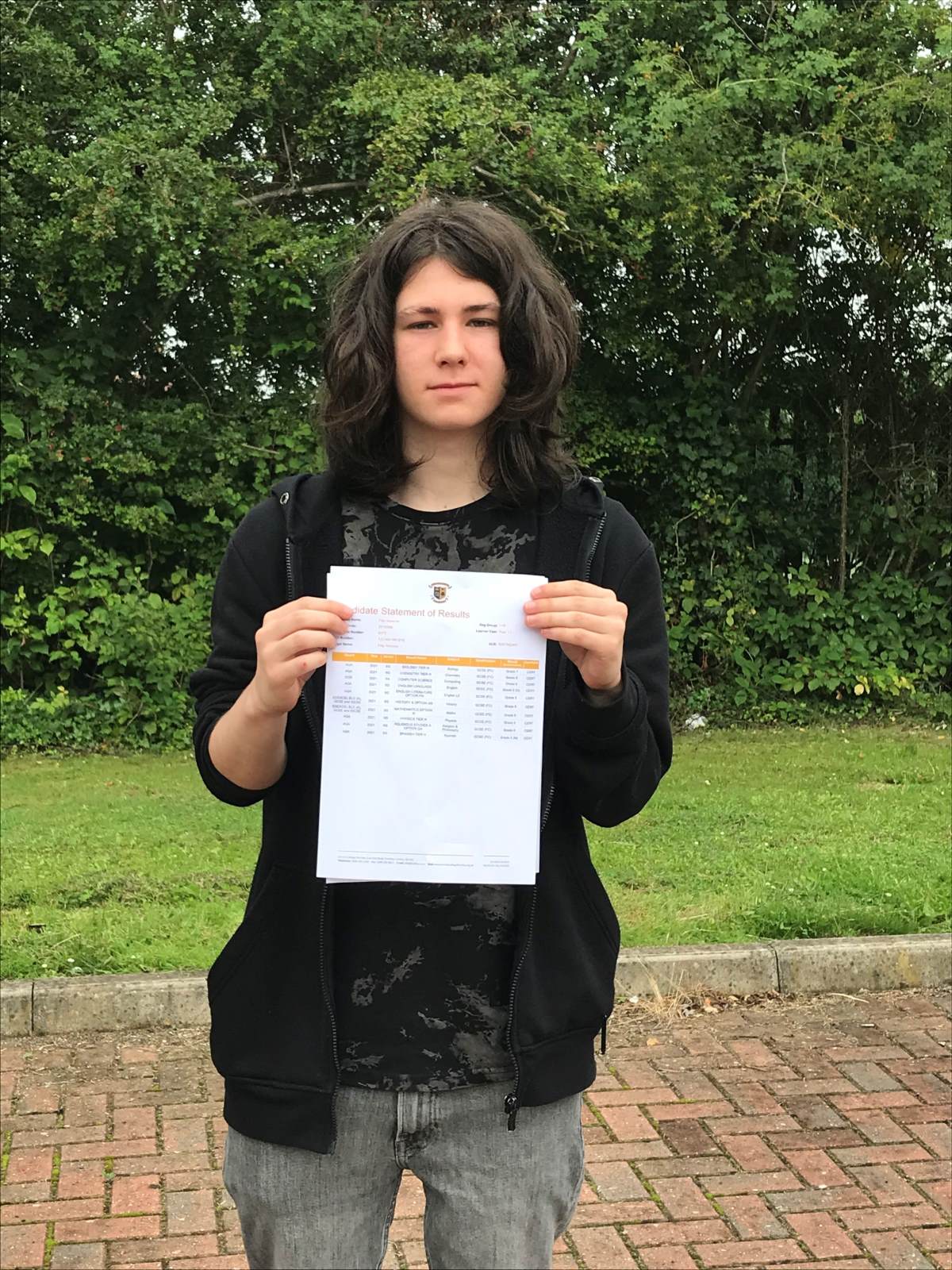 Do not be intimidated at the thought of starting secondary school, as long as you follow instructions and allow the teachers to help you, you will succeed. 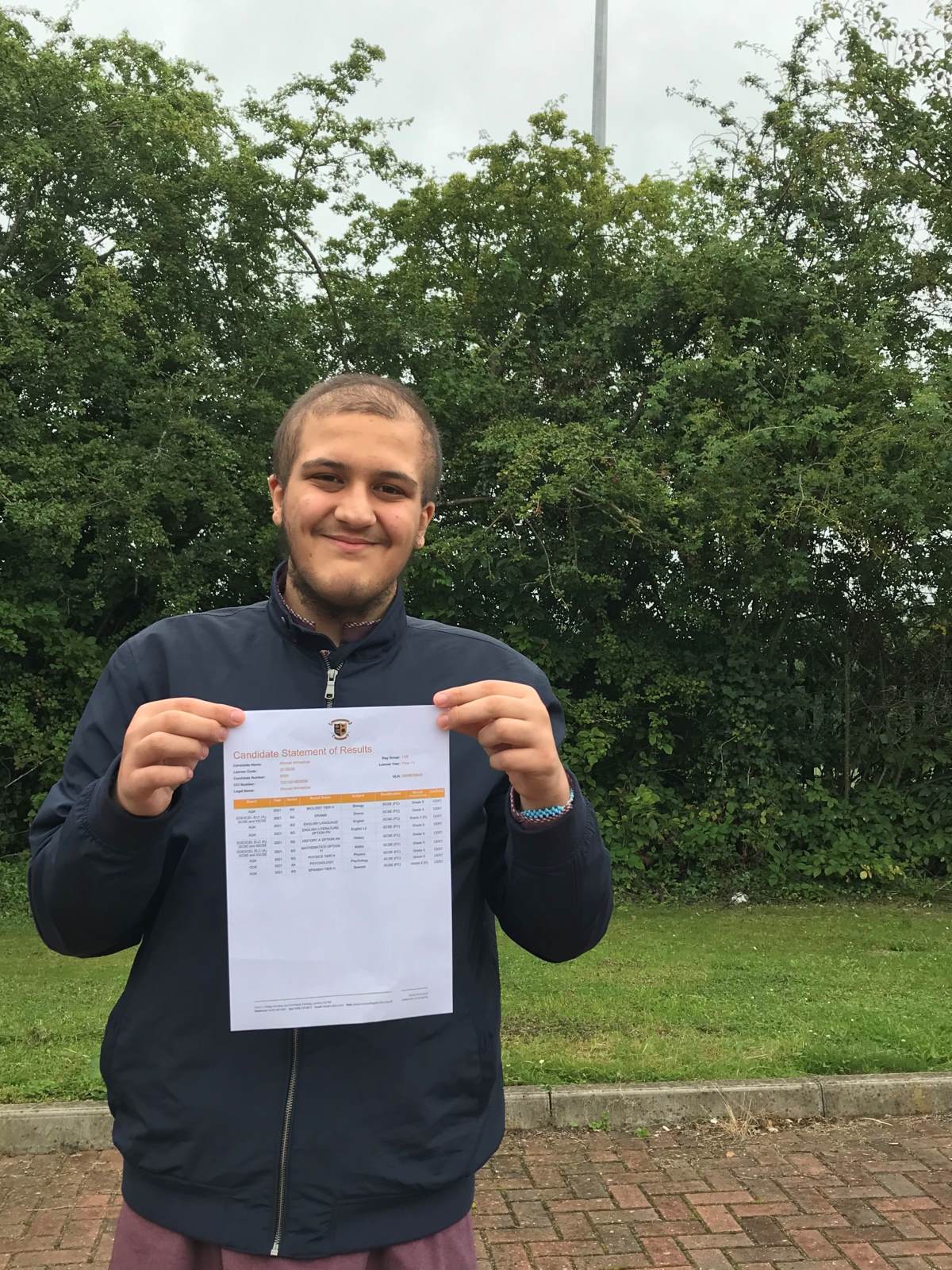 Ahmad (Tudor Primary) achieved a total of 9 GCSEs with grade 9s in Biology, English Language, English Literature, History, Maths and Physics. Ahmad will be staying on at CCF Sixth Form to continue his studies in the sciences because, ultimately, he wants to study Chemistry at university and have a career in any science-related field. Ahmad praised the teachers and said:

The teachers have played an undeniably important role in helping me realise my potential as well as encouraging me. My friends at CCF have also helped me to achieve. It’s important to make friends with those who want the best for you. My teachers and friends have all pushed me to my limit and nothing beats hard work. 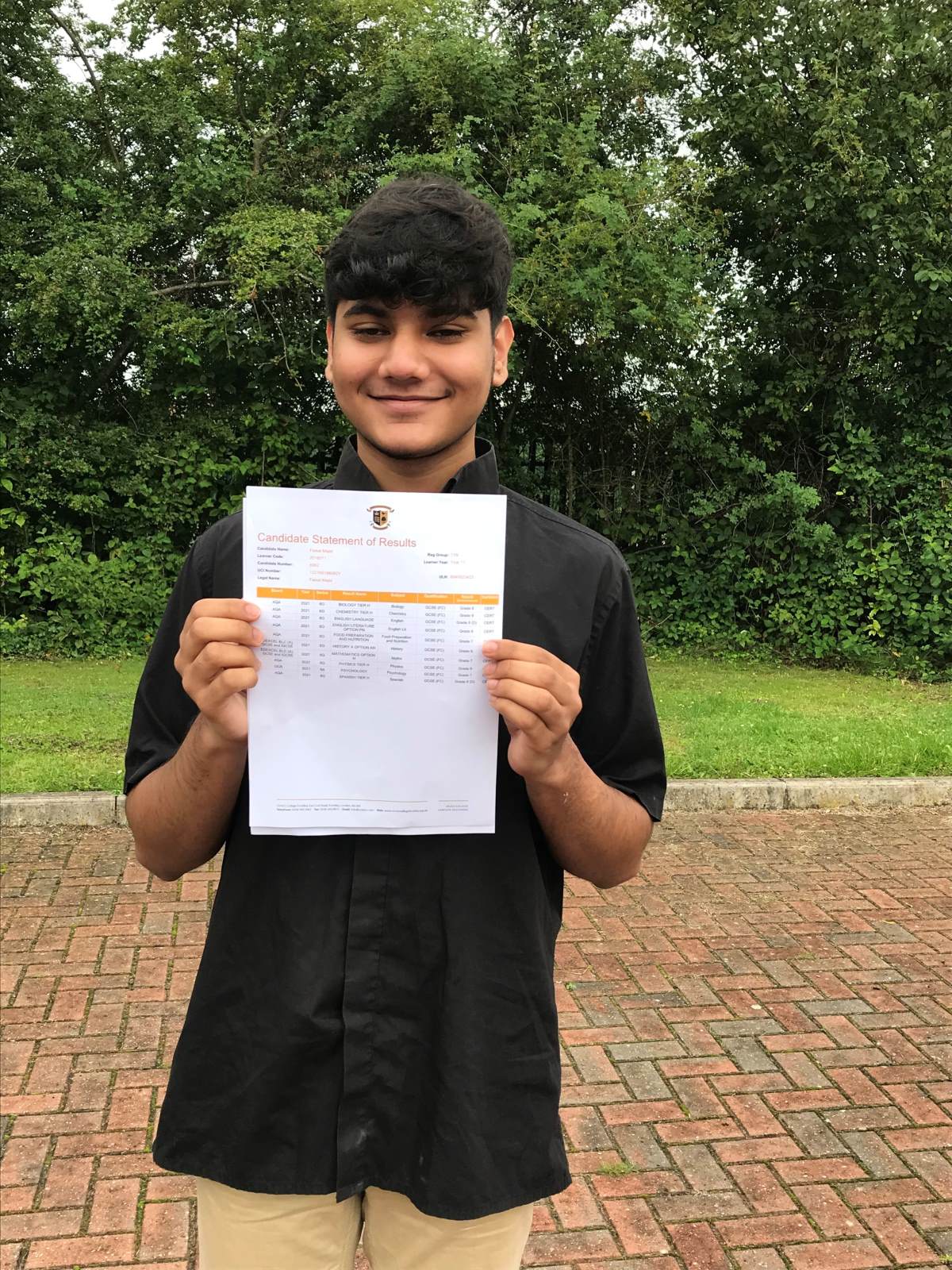 Faisal (Barnfield) secured 10 GCSEs with grade 9s in Physics, Chemistry, History and Spanish. He will be going on to Sixth Form to study English Literature, History and Law as he wants to study Law at Cambridge and has ambitions to be a solicitor. Faisal talks about the relentless support of his teachers:

I have dealt with much adversity and have had extremely supportive teachers that have provided me with unwavering guidance and have been there for me both from an academic and personal point of view. 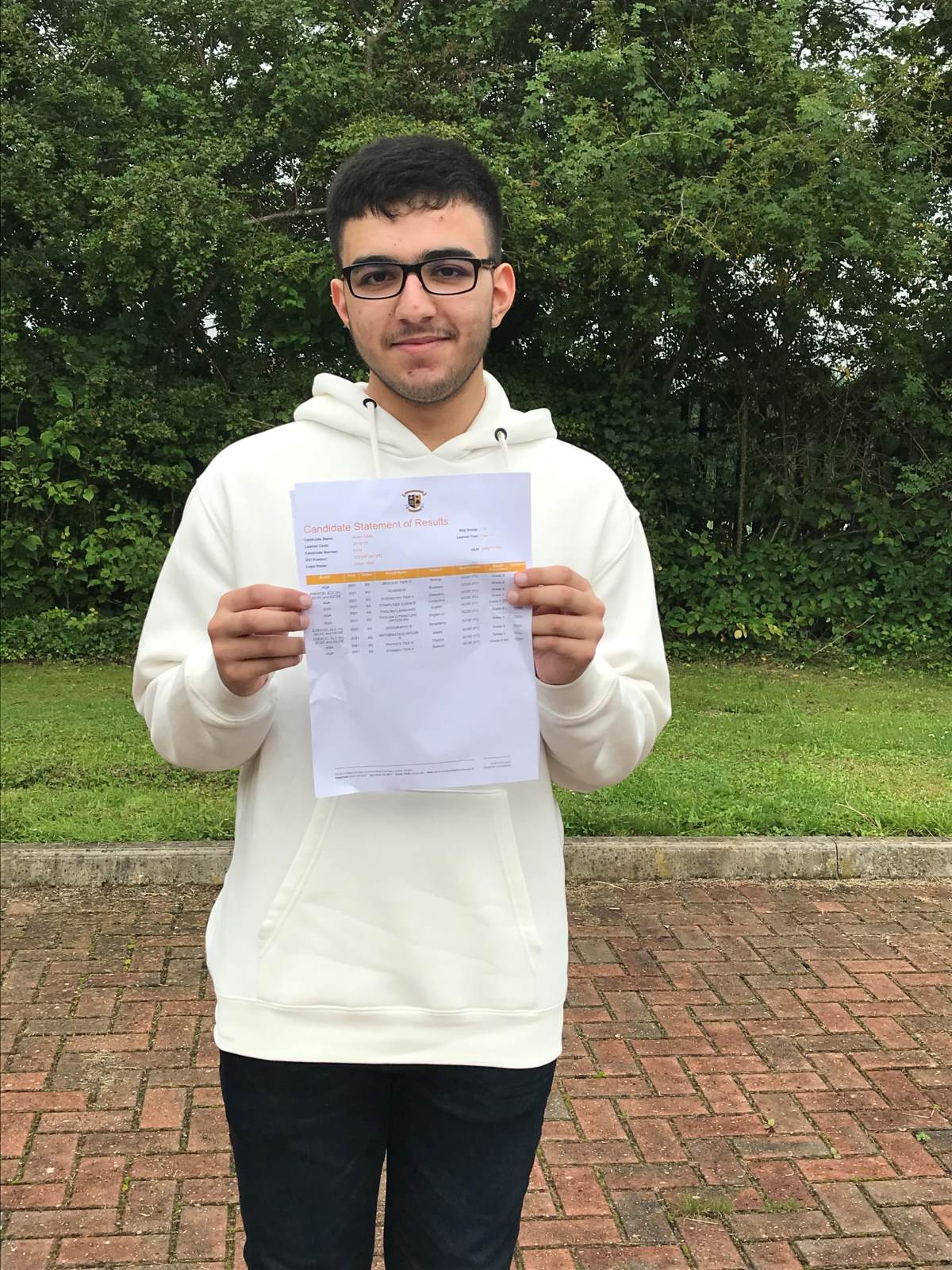 Anam (Claremont) achieved 10 GCSEs with 5 grade 9s in Maths, Biology, Chemistry, Physics and Business. Anam will be staying on at CCF Sixth Form to study Maths, Physics and Economics with a future computer science career ahead of him. Anam credits the teachers for their unrelenting support and advises other GCSE pupils to stay on top of their work and practice, practice, practice those exam papers! 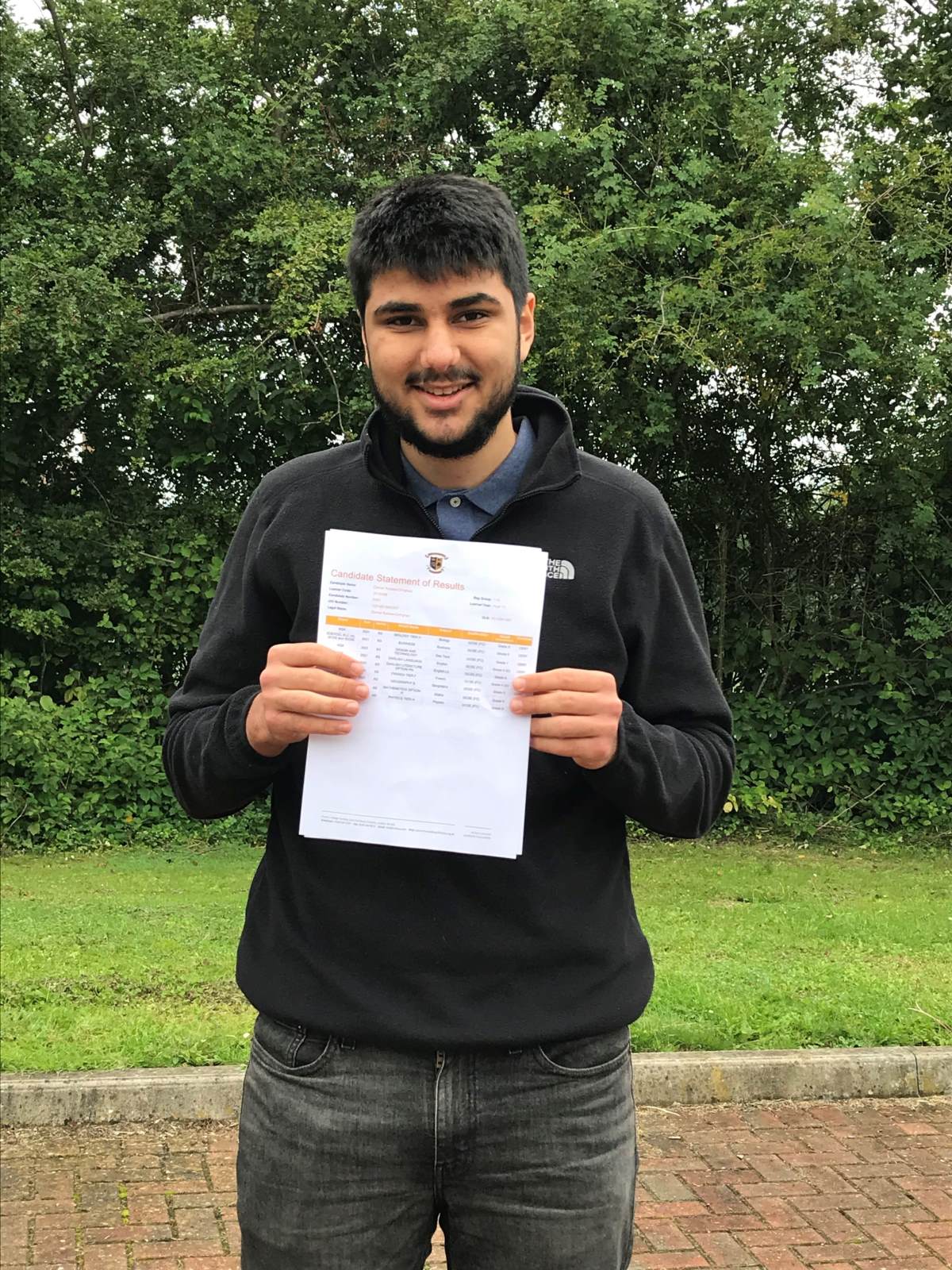 Daniel (Garden Suburb) gained 10 GCSEs with 5 grade 9s in Biology, Business, English Language, Maths and Physics. He is staying on at CCF Sixth Form to study Chemistry, Maths and Biology. He aims to study Dentistry at university and has ambitions to be a dentist. Daniel thanked his teachers:

They always saw my potential and never gave up on me. 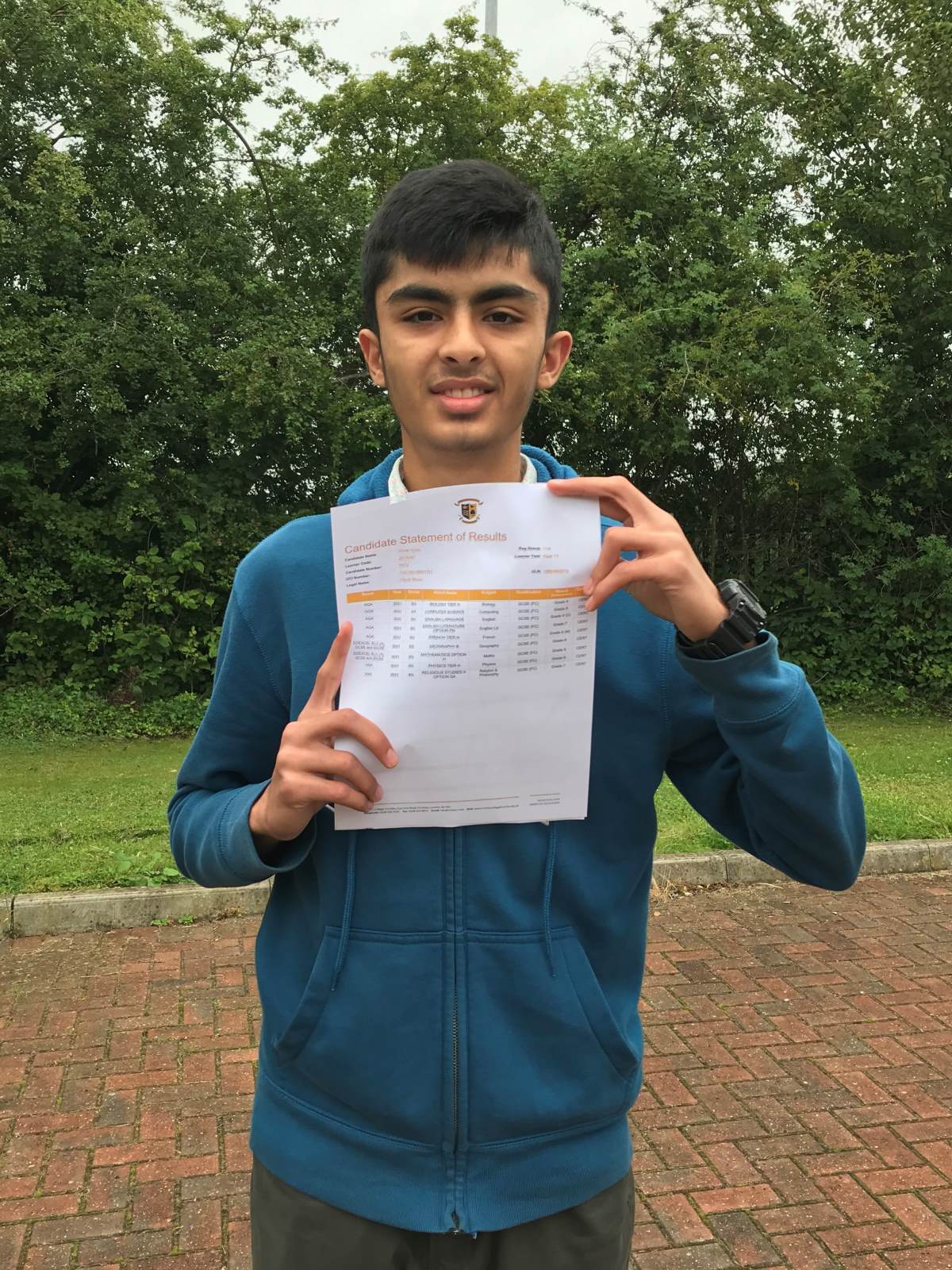 Omar (Frith Manor) secured 9 GCSEs with 5 grade 9s in all three Sciences, English Language (distinction) and Maths. He will be staying on at CCF Sixth Form to study Chemistry, Physics, Maths and Further Maths, and is planning a career in Engineering. Omar’s words of advice include:

Put all your efforts in and you will be rewarded. The teachers at CCF pushed and encouraged me all the way.