On Tuesday 5th July & Friday 8th July, Christ’s College Finchley will be filled by the smell of rebellion when they present Roald Dahl’s Matilda The Musical JR.

Based on the beloved book “Matilda” by Roald Dahl and adapted from the award winning full-length musical, Roald Dahl’s Matilda The Musical JR. tells the story of an extraordinary girl who, armed with a vivid imagination and a sharp mind, dares to take a stand and change her own destiny.

"The pupils at Christ’s College Finchley have been working hard over the last four months, creating an extraordinary performance they are proud to present to their community. Expect to be blown away by the pupils' energy, enthusiasm and commitment to the performance. It will be an event like no other!” Miss H Williams, Director of Matilda.

Performances will be taking place on Tuesday 5th July & Friday 8th July in Christ’s College Finchley’s Theatre at 6:30pm. Tickets can be purchased for £5 via ParentPay. 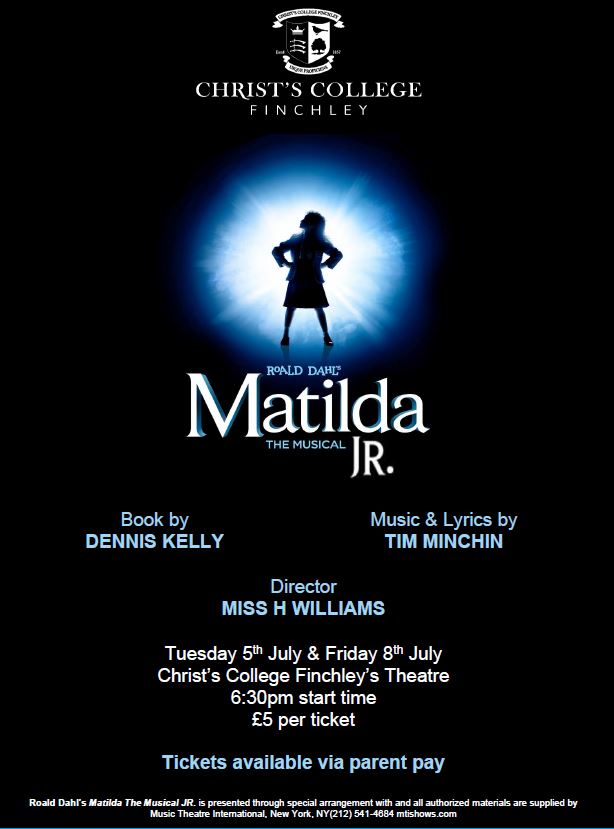 Roald Dahl’s Matilda The Musical JR. is adapted from the full-length musical which was based on the book by Roald Dahl, and features a book by Dennis Kelly and music and lyrics by Tim Minchin. The show opened on the West End in 2011 and made its Broadway premiere in 2013. The musical earned seven Olivier Awards, including “Best New Musical,” and five Tony awards, including The Tony for “Best Book of a Musical.” Matilda, a little girl with astonishing wit, intelligence and psychokinetic powers, lives with cruel parents who find her to be a nuisance, a lousy little worm, and a bore. When Matilda enters her first term at school, she captures the attention of Miss Honey, a kind teacher, and the two form a wonderful friendship. Unfortunately, the school is ruled by a tempestuous and mean headmistress named Miss Trunchbull, who hates children and delivers cruel and unjust punishments to all her charges. Matilda is determined to change her story, but will her cleverness and courage be enough to withstand the reign of Miss Trunchbull?